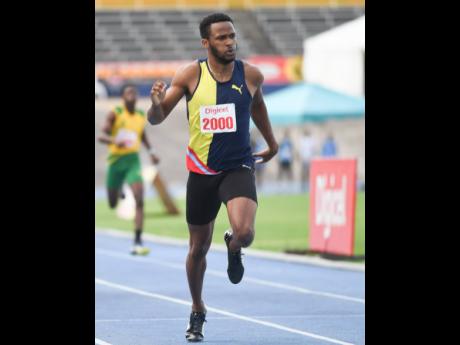 Winthrop Graham’s Jamaica mark in the men’s 400-metre hurdles has stood unchallenged since 1993. According to one coach, several active Jamaicans, including 2018 Commonwealth Games bronze medallist Jaheel Hyde, could surpass the mark if they improve in three important areas.

Okeile Stewart, coach of 2019 World Championship bronze medal winner Rushell Clayton said: “47.60 is not a hard record to break. Most of these athletes these days, their flat 400 is a little bit too slow and they need to get to at least 44 just the same, 44.8-45.2, and they should be in contention. Barring that, their hurdling technique has to be a little bit better, and their core strength has to be a little bit better as it relates to how they decide to approach the hurdle and to run fast times.”

Norway’s Karsten Warholm, American Rai Benjamin and Abderahman Samba of Qatar, the three hurdlers who have recently broken the 47-second barrier, have flat 400- metre personal bests of 44.87, 44.31 and 44.60 seconds, respectively.

He reckons Hyde, whom he coaches, could one day go as quickly as Graham did.

Aware that Kemar Mowatt raced into the 2017 World Championship final and that Andre Clarke was in the 2018 Commonwealth final, he continued, “I see athletes around the place who I think have the potential as well to do the same. It’s just a matter of who is ready to put in the work to go the distance.”

Graham and fellow Olympic runner-up Danny McFarlane parleyed flat 400-metre personal bests of 45.51 and 44.90, respectively, into regular service for the national 4x400-metre team. Stewart hopes to see that from Jamaica’s 400-metre hurdlers in the future.

“I believe our 400 hurdlers should complement the 4x400m team at the national level at all times,” he explained.

“If you look at the US teams, both male and female, their 400m hurdlers are a staple within their 4x400m teams,” he noted, with reference to Benjamin’s presence in the US men’s quartet in the World Championship final and the work of history’s two fastest female 400m hurdlers, Dahlilah Muhammad and Sydney McLaughlin, on the US women’s 4x400m team.