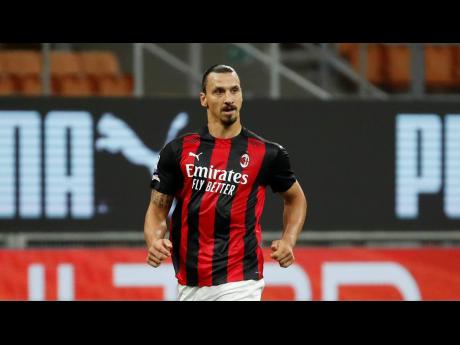 AP
AC Milan’s Zlatan Ibrahimović in action during their Serie A match against Bologna at the San Siro Stadium in Milan, Italy, on Monday.

Zlatan Ibrahimović tested positive for the coronavirus yesterday, and he reacted to the news as only he can.

The AC Milan striker tweeted, mocking the virus, that he was positive a day after testing negative for COVID-19.

Ibrahimović missed Milan’s Europa League match against Norwegian club Bodø/Glimt yesterday and will miss the Serie A match at Crotone on Sunday.

All Milan players underwent a second round of testing on Wednesday after defender Léo Duarte was found to be positive for COVID-19 following tests the previous day.

“Zlatan Ibrahimović has tested positive for COVID-19 following a second round of swab tests ahead of tonight’s game against Bodø/Glimt,” Milan said in a statement. “The club has informed the relevant authorities, and the player has been promptly placed in quarantine at home. All other team members and staff have tested negative.”

The 38-year-old Ibrahimović has scored three goals in Milan’s first two matches this season, in the Europa League and Serie A.

The Swedish forward set up an online fundraiser in March to help hospitals at the centre of the coronavirus outbreak in Italy. He launched it with a video message which he ended by saying: “And remember, if the virus don’t go to Zlatan, Zlatan goes to the virus.”

“I tested negative to COVID yesterday and positive today. No symptoms what so ever. COVID had the courage to challenge me. Bad idea.”