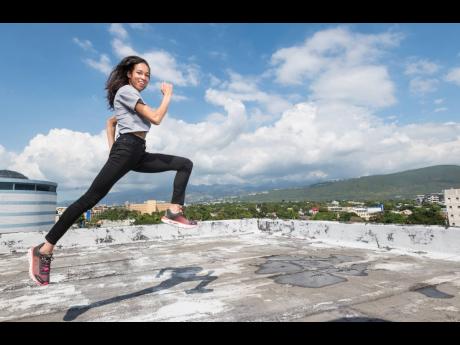 Gladstone Taylor
Commonwealth Games gold medal winner in the 3000m steeplechase Aisha Praught-Leer strikes a pose during a visit to the offices of The Gleaner Company (Media) Limited recently.

In addition, Graham sees Praught-Leer’s improvement on the national 5000-metre record as a sign of good things to come.

That performance has made Graham optimistic about Praught-Leer’s prospects for the future.

“It’s a really good sign, I think, for Jamaica ... maybe she can be a little bit of a role model for others, you know, to go into the middle, even long distance,” said Graham.

Praught-Leer, the Commonwealth champion and World and Olympic finalist in the 3000-metre steeplechase, went down in distance last year to the 1500 metres and won silver at the Pan-Am Games.

Asked about Praught-Leer’s prospects for 2021, the Texas-based nutritionist offered a word of advice.

“Yes. The key is to stay healthy and, consequently, be consistent, right; not to over train,” Graham offered, reflecting on the injuries she suffered as an active athlete.

She also urged attention to speedwork.

“When athletes go to the long runs, they sometimes forget the speed. It seems like they’re getting longer and longer, but they’re getting slower and slower with their speed. So those like steeplechase and the 5000m, they still need to be able to have that kick on the end,” Graham noted.

“I’m not surprised from the 1500 metres up because to be a middle-distance runner, the training is brutal,” she responded with an intimate knowledge of the nation’s love of sprinting.

Despite that, she reckons that Jamaicans could succeed in longer events, too.

“I’m sure that if somebody would do the training, I think there would be someone who gets close to the records, who would maybe get my records.”

Her remaining national records are 4 minutes 01.84 seconds for 1500m, 4 minutes 24.64 seconds for the mile, and 8 minutes 37.07 seconds for 3000m. Graham also has the distinction of being the first Jamaican, male or female, to reach a World or Olympic 1500m final following her 10th-place finish in the 1995 World Championships.

Madrea Hyman placed 10th in 2001 and later reached both the 2005 and 2007 World Championship finals in the 3000m steeplechase. In 2005, Hyman had compatriot Korene Hinds with her in the final where Hinds finished fourth.