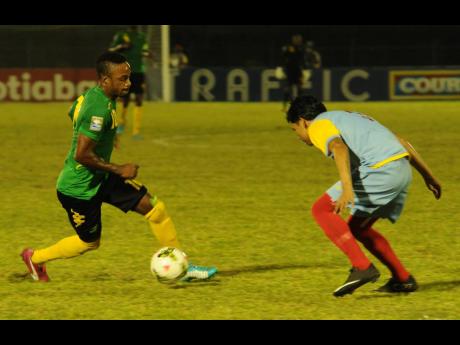 Phoenix Rising FC head coach Rick Schantz says his Jamaican striker, Junior Flemmings, was not given fair treatment after allegations that he made a homophobic slur towards an opponent.

The allegation is that Flemmings used a derogatory Jamaican term for homosexuals, aimed at San Diego Loyal midfielder Collin Martin, an openly gay player, during their United Soccer League (USL) game on Wednesday.

Schantz says that enough scrutiny has not been given to the situation before passing judgement on the player, especially as he has since strongly denied the allegation, both publicly and privately, to him on numerous occasions.

“It’s something I’m frustrated by because we weren’t even on the bus and it was all over the world, and we were being prosecuted and nobody took the time to ask questions,” Schantz said in an interview with ABC15 on Thursday. “Nobody gave Junior, whether he said this or not; no one gave him due process.

Flemmings and Schantz have both since been placed on administrative leave by Phoenix while the club and USL investigate the incident. But Schantz says that if Flemmings was in fact guilty of the slur, action should be taken against him.

I do agree with Landon [Donovan] (Loyal’s head coach) that if the homophobic slur was stated, there’s no place in football for it and something should be done about it. After the investigation, we’ll see,” he said.

Because of Loyal’s forfeiture of the game, having decided not to return for the second half after the alleged incident, USL decided yesterday to award a 3-0 victory to Phoenix.