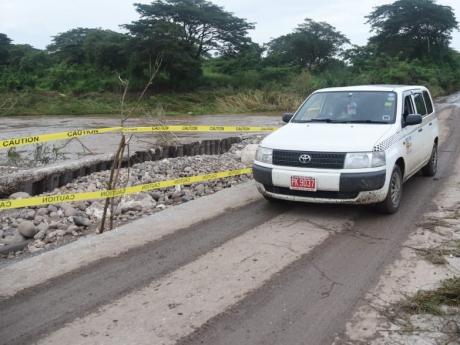 The preliminary estimate covers road clearance, drain cleaning, access creation and road patching but does not include the cost for permanent repairs or major rehabilitation to roads and bridges.

Prime Minister Andrew Holness has indicated that the damage caused by Tropical Storm Zeta is at $2 billion and counting.

But speaking in Parliament Tuesday, Holness said the estimate, included in a report presented by the National Work Agency (NWA), is preliminary because the agency is still unable to access all communities which recorded damage.

However, he has warned that the estimate could “rise significantly”.

The preliminary estimate covers road clearance, drain cleaning, access creation and road patching but does not include the cost for permanent repairs or major rehabilitation to roads and bridges.

“This $2 billion would only cover what would be needed for example, to clear the gorge or roadways that have been made impassable and to undertake clearing of drains and gullies and so forth,” Holness said.

According to the Prime Minister, there has been significant damage to parochial roads with some 60 per cent affected.

Kingston, St Andrew, St Catherine, Clarendon and Manchester were the most affected parishes.

The Prime Minister said although the estimates are still being finalised, the damage to parochial roads and drainage networks will run in excess of $700 million and so all required works cannot be immediately done.

The government, Holness said, is proposing a programme of targeted interventions with the opening of blocked roads being prioritised.

At the same time, Holness said each constituency will be allocated $1.5 million from the Housing Fund to assist with repairs to housing infrastructure that have been damaged during the floods.