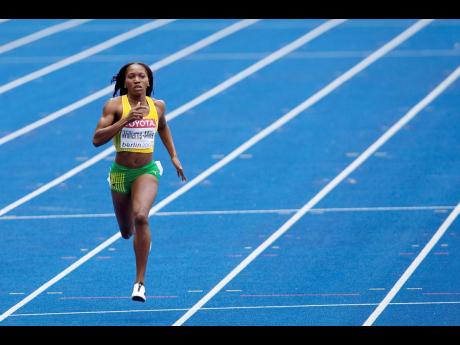 Although Breast Cancer Awareness month is almost over, Olympian Novlene Williams-Mills has taken some time to reflect on her battle with the disease. She says that competing at the highest level helped her overcome.

Williams-Mills was diagnosed with breast cancer a few days before competing in the National Championships and weeks before the London Olympics Games in 2012.

She said it was a difficult time in her life because she now not only had to compete for her country, but also against a deadly disease for her life.

“Being at the Games was difficult,” Williams-Mills shared with The Gleaner. “Everyone was there to win. I was there to get away from the reality of everything, take my mind off my upcoming surgery.

“Every time I stepped on that track, I was wondering if I was running my last race. The emotions of everything were hard. I would put a smile on my face for everyone, but I was in so much pain, I would cry.”

Although she was affected mentally, emotionally, and physically, Williams-Mills was able to win the National Championships in the 400m and went on to win a bronze medal at the London Games as a member of the 4x400m relay team.

She said that she later learned how to deal with the stress that came from being diagnosed with breast cancer because of competing.

“It was as if every appointment was training, and when I was going to do the surgery, it was my own Olympics, (and) I was going to win at all cost,” she said. “But most importantly, I knew I wanted to challenge myself to see how hard it was going to be to get back to competing again.

“It helps a lot [by] just giving me that ‘never-giving-up’ mindset.”

Although she mainly spoke about sports helping her with her mental health, a roundtable convened by the American College of Sports Medicine in 2010 showed that keeping physically fit does more than just that.

“Exercise can lower your risk of breast cancer coming back as well as help you maintain a healthy weight, ease treatment side effects, boost your energy, and more,” the research mentioned.

Williams-Mills said that it was after being diagnosed with cancer that running became more personal for her, and she began to use her platform to advocate for breast-cancer awareness.

“It was not about winning races all the time for me,” she said. “I was given a second chance at life [and] at what I love to do.

“So for me, it was showing people who have cancer, whether it being breast or not, that life doesn’t have to end, that you don’t have to give up everything that you love. If I could be out there still competing, then they can enjoy what they love to do.”

Williams-Mills encourages other athletes battling breast cancer to stay in sports and use the same level of competitiveness to fight against the disease.

“I would tell them take time for themselves and get back to the sport when they are ready, not when everyone else thinks they are, because not every day will be sunshine. There will be clouds and rain,” she said.

Williams-Mills retired from track and field after the Brussels Diamond League meet in September 2017. She has since given birth to twin boys earlier this year.