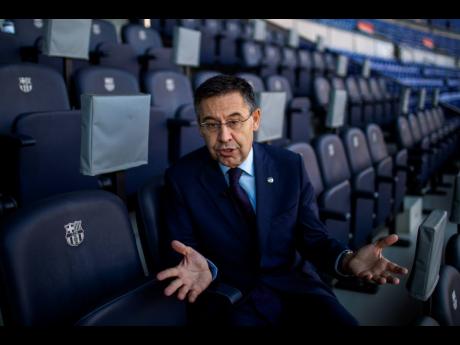 The potential launch of a European Super League was given credence yesterday when Barcelona’s outgoing president revealed that the club had given its initial approval to a new competition.

Josep Bartomeu said it was one of his last calls before resigning from Barcelona, adding fuel to growing reports about new Europe-wide competition where elite clubs could play each other more often.

Currently, the UEFA-run Champions League is the only top-level club continental competition teams play in. It was not immediately clear from Bartomeu’s comments who would be organising a Super League or if such a competition would only replace the Champions League.

“I can announce that we approved the requirements to be part of a European Super League,” Bartomeu said. “The decision to play the competition now must be ratified by the next (club) assembly.”

The announcement alarmed the head of the Spanish league, Javier Tebas.

“Unfortunate Josep Bartomeu announcing on his last day the participation in a phantom competition that would ruin (Barcelona) and reiterating his ignorance about the football industry,” Tebas tweeted. “A sad end for a president who did many things right but that lately made many mistakes.”

Bartomeu has been one of the most influential figures in shaping the future of European competitions. Until July, he was a member of UEFA’s Professional Football Strategy Council, which is at the heart of European policy with four seats each for national associations, clubs, leagues and the FIFPro players’ union.

The European Club Association did not immediately respond to a request for comment. Bartomeu is a member of the board of directors of ECA, which is led by Juventus president Andrea Agnelli who also sits on UEFA’s decision-making executive committee representing clubs.

The ECA board is next due to meet in November ahead of UEFA’s executive committee meeting in early December.

Only last week, UEFA spoke out against the launch of any breakaway Super League after Real Madrid president Florentino Perez was reported by Sky News to be one of the driving forces behind a plan to launch a European Premier League.

“The principles of solidarity, of promotion, relegation and open leagues are non-negotiable,” UEFA said. “It is what makes European football work and the Champions League the best sports competition in the world. UEFA and the clubs are committed to build on such strength not to destroy it to create a super league of 10, 12, even 24 clubs, which would inevitably become boring.”