Ewers putting lessons to good use 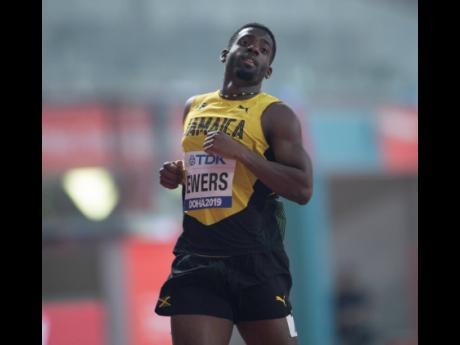 Sprinter Andre Ewers learnt as much as he could last year, both on the track and off it.

On the track, Ewers imbibed his first taste of international athletics at the Pan-American Games in Lima, Peru, and at the World Championships in Doha, Qatar. Off the track, he seized the opportunity to learn from accomplished teammates.

In Lima, as an outgoing Florida State University senior, he did well to reach the 200 metres final. That race was a month and a half after the last NCAA Championship of his career, in which he and his Jamaican room-mate, Jhevaughn Matherson, carried Florida State to second in the 4x100m. His debut international season ended in Doha with a creditable run into the 200m semi-final.

His third-place finish at the National Senior Championships put him in the company of sprint supremos Shelly-Ann Fraser-Pryce, Elaine Thompson Herah and Yohan Blake, and Ewers knew he had a chance to learn.

“I have different track people that I like to take things from, and I like to pick their brains when I talk to them. I’ll give you an example. At World Championship and Pan-Am, I took the opportunity to pick Shelly-Ann, Elaine and Yohan Blake’s brains, and things that I took from them, I don’t think they noticed, but it helped me a lot in my training,” said the 25-year-old sprinter.

The benefits have spilled over into 2020 for the young man, who left Jamaica at age 12 and grew up in Florida. Though he had a truncated season, he produced his fastest season opener in the 100m and came close to his personal best with times of 10.10 seconds on July 24 and 10.04 on August 8. He believes the insight he gleaned from Fraser-Pryce, Thompson Herah and Blake had a positive effect on his approach to training and his mindset.

The 10.04 is within touching distance of his 9.98 seconds personal best, which he established in a fine 2018 season. He finished that campaign as the NCAA bronze medallist in the 100 metres and as the runner-up in the 200m.

He gained knowledge in competition, too.

“Running with the big dogs, it proved to myself that I’m not nervous or afraid of anybody on no particular type of level,” he submitted.

Clear of the injury niggles that slowed him during his 2019 season, Ewers is hoping for good things. If he follows in the footsteps of Fraser-Pryce, Thompson Herah and Blake, he’ll be teaching others soon enough.