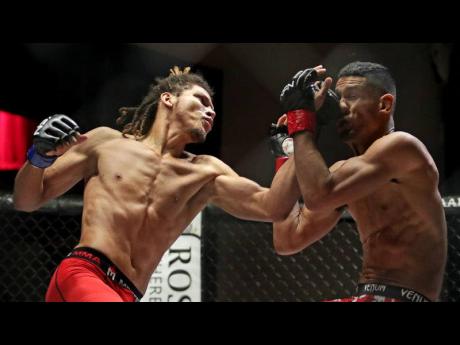 Mixed martial artist Matthew ‘Gold Lion’ Colquhoun says not even the coronavirus pandemic can prevent him from achieving a berth in Dana White’s Contender Series.

Colquhoun leaves Jamaica for the United States, where he faces Mark ‘Showtime’ Martin in Legacy Fighting Alliance, mixed martial arts (MMA) promotion, at the welterweight (170lb) level on December 4. Should he win, he would secure a spot in the Contender Series, where he would look to impress Ultimate Fighting Championship president Dana White and land a contract with the promotion.

Colquhoun says the pandemic has changed how he has been preparing for battle this year, but he has remained optimistic.

“It’s very different from any other camps I had to prepare for because now, I have to be very careful who I train with,” he said. “I keep a very small group. I have been training since I’ve been back in Jamaica for the past two months now.

“I train with Kyle Chin, Imran Hall, and Stephen Heavens, which are very good fighters. We’ve been training consistently because my coach has been telling me to keep in fight shape because opportunities will come despite the coronavirus.”

Colquhoun says that he has scouted Martin well, and while he knows his opponent is experienced as a wrestler, he will be focused on striking.

“He likes to back you up, get you on the cage and take you down and try to work from there,” Colquhoun said. “He’s from a fairly decent gym called ‘The Lab,’ in California. They have a few decent fighters there. I found a few of his recent fights, and I see good wrestling, but I’m a better striker.

“I’ve been training with a lot of wrestlers over the past two years. So I don’t see his wrestling being too much of a problem. My game plan is to, basically, keep the fight on the feet.”

Colquhoun leaves Jamaica for California next week and will go immediately into quarantine upon arrival at his camp in California. There, he will continue training as he intends to have both strikers and wrestlers with him in his bubble.

Colquhoun’s record stands at eight wins and four losses while Martin has a record of five wins and one loss.