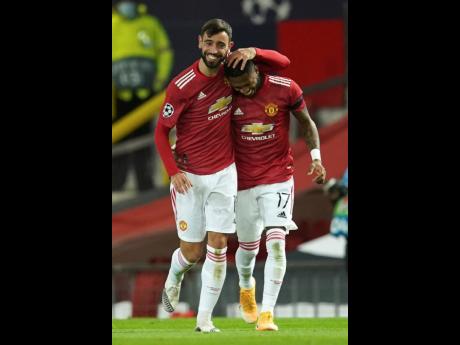 Bruno Fernandes scored two early goals then passed up a chance to complete a hat trick from the penalty spot as Manchester United beat Istanbul Basaksehir 4-1 to stay in control of their Champions League group yesterday.

Fernandes handed over spot-kick duties to Marcus Rashford, who had been brought down for the penalty, and the England forward converted to make it 3-0 in the 35th minute at an empty Old Trafford.

Deniz Turuc pulled a goal back from a free kick for the Turkish champions, who were outplayed three weeks after earning a surprise 2-1 win over the English club in Istanbul for a result that threw Group H wide open.

Daniel James added a fourth in injury time for the hosts.

United, who opened group play by beating Paris Saint-Germain and Leipzig in successive weeks, moved onto nine points – three more than both PSG and Leipzig. They also played yesterday, with PSG winning 1-0 at home.

United are at home to PSG next week, with the two qualifying places from the group still up for grabs.

Fernandes’ goals came in the opening 17 minutes and were of contrasting quality.

The first – in the ninth minute – was a powerful, rising first-time effort from the edge of the area that flew high into the net.

His second came from close range when he tapped into an empty net after goalkeeper Fehmi Mert Gunok spilled the ball off a cross.

Since his debut for United following his January move from Sporting Lisbon, Fernandes has scored 21 goals and made 13 assists in 35 appearances.

The Portugal playmaker has nine goals in his last 11 games.