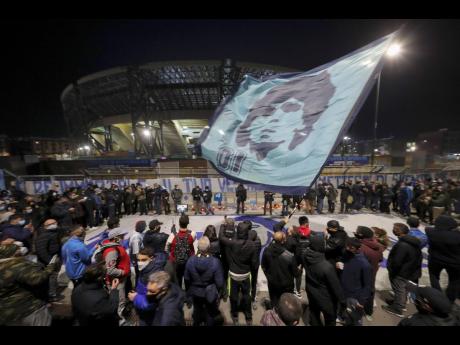 Argentina’s Ambassador to Jamaica, Luis del Solar, described legendary footballer Diego Maradona as a global treasure and an icon that will continue to inspire despite his passing.

Maradona died at home yesterday in Buenos Aires from a heart attack, two weeks after he was released from hospital following surgery to address a blood clot on his brain. He was 60 years old.

“I think it’s a very sad day for anyone who loves sports in general and football in particular,” del Solar told The Gleaner.

“He was an outstanding player, one of the best, if not the best in history. He was magic when he played. He was the leader of the team that won the World Cup, and he was also great at the club level with teams like Barcelona, Napoli, and, of course, his beloved Boca Juniors. Maradona was really loved, and he will be greatly missed.”

Maradona carried Argentina to success in the 1986 FIFA World Cup in Mexico, winning the Golden Ball award as the competition’s best player. He also helped the country to the runner-up spot four years later in Italy. He would go on to represent Argentina in four World Cup tournaments.

The midfielder, who also managed Argentina for two years, scored 34 goals for his country in 91 appearances.

His reverence is also felt strongly in Naples, Italy, after his exploits with Napoli, which he led to their first-ever Serie A title in 1986-87. He also won the Scudetto in 1989-90 and the UEFA Cup in 1989 with the Neapolitans. Maradona also impressed with Boca Juniors and Barcelona.

“Maradona is a world heritage. He’s not just for Argentina. Everyone can watch his games and see his amazing ability. He came from such a very humble beginning and went to the top of the top. It is an amazing story and an inspiration to everyone,” del Solar added.

The ambassador said he was first made aware of Maradona making waves in Argentina because of his mesmerising skills while he was still a teenager.

“I remember him when he was 15. I was about his age, and everybody was impressed that someone so young was so skilful, and as you can imagine, everyone at that time wanted to be Maradona. I can still remember the day we won the World Cup in 1986. Everyone was very happy, and he did a great job leading the team,” said del Solar.

“I don’t think there will be anyone like this ever again. He was unique. He will be missed, but he will continue to be an inspiration to many.”

While respected on the field, Maradona will also be remembered for his turbulent family life, as well as troubles with drug and alcohol abuse throughout his career and after his retirement.

“He was an extraordinary player and an inspiration to individuals in every corner of the globe, including Jamaica. We watched him in awe throughout his glorious career and remember him in a good way. His performances for Argentina, especially those at the 1986 World Cup in Mexico, are etched indelibly in our subconscious. Many of my countrymen became supporters of your team because of his incredible exploits,” said Ricketts.

“This is a sad day for world football. Whether you supported Argentina or not, you have to admit that Diego Maradona was one of the greatest football players the world has ever seen. Nobody dribbled like Maradona. Maradona was colourful and gifted and made the game exciting. It was a pleasure to watch him play at every level,” said Grange.