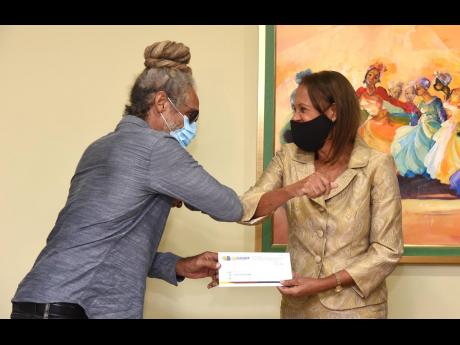 Emboldened by the support of family, friends, and now the RJRGLEANER Sports Foundation Benevolent Fund, Jamaica Surfing Association President Anthony Wilmot says that he is looking forward to rebuilding his home in Nine Miles, Bull Bay, that was destroyed by fire more than one year ago.

Wilmot and his wife, Claudette, were presented with a cheque from the foundation at the RJRGLEANER Communications Group headquarters in St Andrew yesterday. The fund, which was launched last year, seeks to provide support for persons previously honoured by the foundation but require assistance to overcome various challenges.

Wilmot says that he is grateful to the foundation for the support his family has received and credits the initiative as being an asset to those in the industry who need help in different circumstances.

“It’s wonderful to know that amongst our collective industry, that the RJRGLEANER Sports Foundation has seen it as a wise move to put something in place,” he said. “You know, you never can tell what the future holds for you from time to time, as it has been with us on the loss. We are really thankful for the fact that RJRGLEANER Sports Foundation has established a platform like this for assisting people that find themselves in situations like mine.”

Wilmot says that while the months since the fire have been challenging, he is encouraged by his family’s strength and the assistance received.

“Like everyone who faces a tribulation, you overcome it based on the resolve within yourself and in your family,” he said. “And as a result of our resolve, we are moving forward, and with the assistance of many friends, family and well-wishers, we have been able to move forward and we are seeing progress.

“Hopefully with this additional help, we should be back in the house in short order.”

RJRGLEANER Sports Foundation board member Molly Rhone, who presented the cheque to the Wilmots, said that the gesture shows that athletes are being supported not only for their on-field performances, but when they are going through challenging times.

“It’s good to know that you are looking about them,” she said. “When they perform, everybody claps. But a lot of them have had hardships and need the extra funds to help them overcome what they are suffering. And so, I think that it’s a good thing that was suggested.”