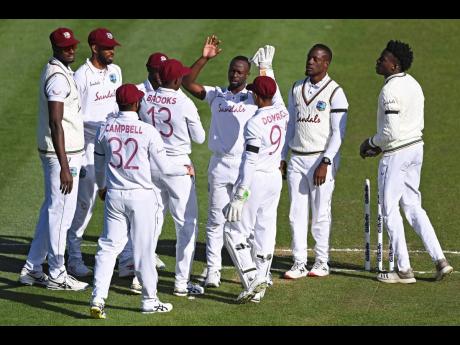 The West Indies Kemar Roach (centre) celebrates with his teammates after taking the wicket of New Zealand's Tom Latham during play on day one of the first cricket Test against New Zealand in Hamilton, New Zealand on Thursday, December 3, 2020.

The West Indies were made to chase leather on the rain-affected opening day of the first Test against New Zealand, as the home side dominated preceding’s thanks to half-centuries from Tom Latham and captain Kane Williamson.

At stumps on day one, the host reached 243 for 2 after only 78 overs were possible after the rain had forced a late start in Hamilton.

Williamson needs just three runs later today to complete his 22nd Test hundred, as he and Latham capitalised on a good green batting surface after being sent in to by Jason Holder.

The pair shared in a 152 run second-wicket stand with Latham going on to get a well-played 86, which included 12 fours and a six.

It took a returning Kemar Roach in his third spell to get rid of the New Zealand opener, who was bowled when the Kiwis were 168 for two.

It took the West Indies some time to pick up that second wicket after Shanon Gabriel had given them a decent early start when he removed debutant opener Will Young, lbw for five at 14 for one.

Williamson, however, was his usual resolute self, soaking up deliveries and pouncing on bad balls, as he and Ross Taylor continued to put runs on the board towards the close of play.

The pair have so far added 75 runs for the second wicket, with Williamson on 97 and Taylor not out on 31.

Vice-captain Roston Chase says the new ball on today's second day will be crucial, however, he gave kudos to Williamson and Latham for their resolute knocks.

“Obviously, we didn’t have the best day in the field and we only got two wickets. I thought the New Zealand batters played well but we have to hit those lines and lengths again and make the batsmen play more with the new ball if we do take it early today and make it count," said Chase.

The second day’s play is set to begin at 5:00 pm Jamaica time.