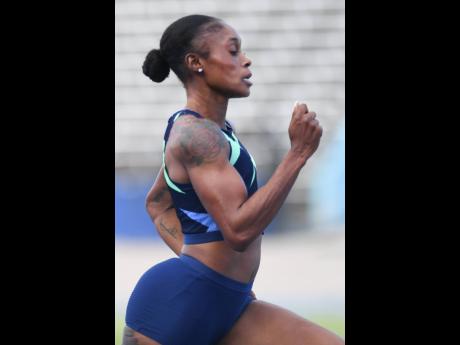 In spite of a pandemic that caused massive upheaval to the 2020 athletics season, double Olympic sprint champion Elaine Thompson Herah described her season as a “blessing in disguise,” one that has allowed her to return to her best

The 28-year-old Thompson Herah is among the five finalists for the World Female Athlete of the Year 2020 Award, which will be given at the World Athletic Awards tomorrow in a virtual ceremony.

It is the second time that she has been named a finalist for the award, and this year she faces competition from Letesenbet Gidey of Ethiopia, Sifan Hassan of the Netherlands, Peres Jepchirchir of Kenya, and Yulimar Rojas of Venezuela, who all broke world records in their respective events.

It was also a year that Thompson Herah returned to the track from a foot injury, which saw her 2019 season end at the World Championships in Doha, Qatar.

In an Instagram Live interview with World Athletics yesterday, she said that the delays and postponements caused by the pandemic worked in her favour, as this allowed her to properly heal and put in consistent performances.

“I guess they would say Elaine is back, but she didn’t go anywhere. I was just getting over that injury and I think 2020 has given me that chance to fully recover, and I must say that I was really grateful to actually be able to race every weekend pain-free, and to actually get some good times in,” Thompson Herah said. “I’m really grateful for that [and] that put me in a position right now to see where I was in 2020 and what I could look forward to in 2021.”

With the restart of the local track season in July, Thompson Herah raced the majority of her meets at home this season, only participating in two Diamond League events in Italy and Qatar.

However, she finished the 2020 campaign unbeaten in seven 100m races, setting a world-leading time of 10.85 seconds in Rome on September 17. Additionally, she has run four of the 10 fastest times in the world this year.

She admitted that she was ‘shocked’ when she received the news of being named a finalist, and while motivation has been in short supply because of the postponement of the Tokyo Olympics, Thompson Herah says that she is pleased at the results of her hard work this season.

“I think the most challenging thing was to get up out of bed knowing that there was no Olympics, but I still managed to push myself each day and put in the work and get the result that I want,” Thompson Herah said.

With an eye towards the rescheduled Tokyo Games next July, Thompson Herah says that there will be no changes to the formula that brought her success in 2020.

She is the only Jamaican athlete to be nominated for either the male or female Athlete of the Year Award in 2020.