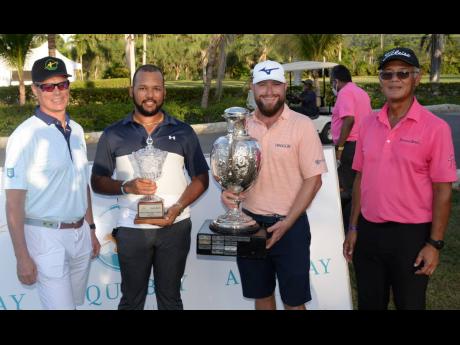 American Erik Barnes and national amateur champion William Knibbs held off the field to capture the professional and amateur sections, respectively, at the 53rd Jamaica Open at Tryall Golf Club.

Barnes, who was playing in Jamaica for the first time, made it a wire-to-wire finish in the pro division, after leading from day one. The Korn Ferry tour pro finished with a three-under par 69, with four birdies and one bogey on Tuesday’s final day for an overall 13-under par 203, to win by three shots.

“It feels great every time you come to a new tournament and get a win, it’s awesome. David (Morland) didn’t take it easy on me early in the round and I had to keep my feet on the gas and keep going. To have one bogey in the final round is awesome,” said Barnes.

Canadian Morland managed a one-under par 71 in his final round to finish ten under for the tournament, with a total score of 206 for second place.

American Brad Adamonis and compatriot Ryan Linton were tied for third place after carding final rounds of 69 and 67 for 209 totals, respectively.

Jamaican Orville Christie held off his compatriots to finish as the best-placed local, following a final round one over par 73, for a total of 226, which was good enough for 16th place.

In the amateur section, Knibbs held on to his overnight lead, following a steady even-par round of 72, for a three-day total of 215. His consistent play allowed him to seal the wire-to-wire win by 14 shots, with his nearest rival being American Robert Owen, who shot a plus-five in his final round for a total of 229.

“It feels good. It was one of the goals that I sat down with my coach at the start of the year – that I wanted to win this tournament. It’s very satisfying when you can say that you achieved your goal,” said Knibbs.

American Hunter Summy rounded out the top three, following a final-round four over par 76, for a total of 233. Defending champion Justin Burrowes ended in fourth place with a total of 234.