‘It was extraordinary’ - Atkinson thrilled with ISL lessons and experience 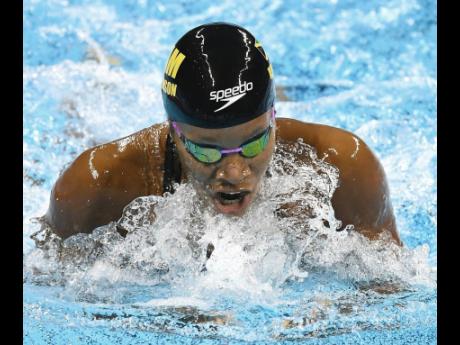 Four-time Olympian Alia Atkinson has described her experience in the 2020 International Swimming League (ISL) as an extraordinary one.

Atkinson says her ISL teammates and coaches taught her a lot during the six-week series of swim meets in Budapest, Hungary. As a result, the Jamaican star has emerged ready to face the challenges ahead.

As a precaution against COVID-19, the ISL teams were in a so-called ‘bubble’ for the six weeks of competition.

Speaking from her base in the United States, the world short course 50- and 100-metre breaststroke record holder exulted, “It was extraordinary. It was a great experience. I got to learn a lot, not just from my fellow teammates, but from the coaching as well. People that I would never get the chance to sit down and talk to, because usually when I see them, they’re in the middle of competition, so they’re in race mode. So being relaxed and just having a normal conversation, those are things that I would never get the chance to do.”

“So I was really lucky and blessed to be a part of London Roar this year, and yes, it was fun to be a part of something bigger than myself, where every point counts towards the majority goal,” Atkinson shared.

“I think, mentally, especially with COVID and everything going on, it was a great reminder, being part of a team, to just be mentally strong throughout everything,” concluded the 2012 and 2016 Olympic 100-metre breaststroke finalist.

Atkinson would normally have staged swim clinics in Jamaica in December but the Olympics and the COVID-19 outbreak have prompted a scheduling rethink.

“Last time, I got a lot of swimmers from the US and the UK that wanted to join, so with international travel not bringing them down, it wouldn’t have made sense,” she noted.