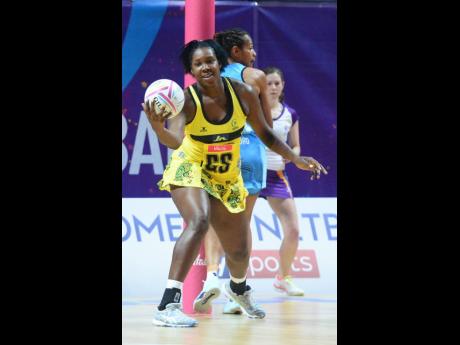 Despite featuring in only one international series in 2020 due to the COVID-19 pandemic, Jamaica’s Sunshine Girls shone brightly around the world for their respective clubs in 2020.

The Sunshine Girls began the year brilliantly as they defeated hosts England, New Zealand, and South Africa in the preliminary round of the four-nation Vitality Cup.

However, the Connie Francis’ team couldn’t replicate their preliminary-round form, as they were beaten by New Zealand in the final of the competition.

Jamaica ended the year in fourth spot in the International Netball Federation world ranking with 175 points, one place below their rivals England, who also ended on 175.

Australia ended the year as the number one ranked team, ahead of world champions New Zealand.

Netball Jamaica President Tricia Robinson, who was elected to the role unopposed in February, said the development of the sport suffered a significant setback in 2020. This is because the COVID-19 pandemic caused a cancellation of all the local leagues and national Test series.

“It was a tough year for netball, and challenging, like all other areas in the economy, and the world as a whole,” she said. “We started the year off on a bang in 2020 and we were looking forward to starting 2021 in the same way. We only had one round of games in one of our leagues before COVID hit us, but what we did is that we used the time to do refresher sessions online for everyone, and it allowed us to utilise the technology available to get some stuff done.”

Fowler secured her third consecutive Most Valuable Player (MVP) award after another outstanding showing in the shooting circle for the West Coast Fever.

The 31-year-old finished the season with 965 goals, the most in the competition this season, with a 94 per cent shooting accuracy. She was also crowned the MVP of the Fever’s team for the second consecutive season.

Aiken, who plays for Queensland Firebirds, also had an excellent year in the shooting circle as she finished in the scoring chart behind Fowler with 583 goals.

However, Aiken, a former Jamalco player, topped the chart for the most offensive rebounds with 110, ahead of Fowler’s 68.

Sterling, who plies her trade for the Adelaide Thunderbirds, received the most defensive rebounds in the league with 37.

Sterling and Fowler were named to the Team of the Year for the competition, with Aiken making the reserves.

Dehaney played a vital role in helping the Melbourne Vixens to secure the title last year, while Nelson and Ward had excellent showings for the Collingwood Magpies in the competition.