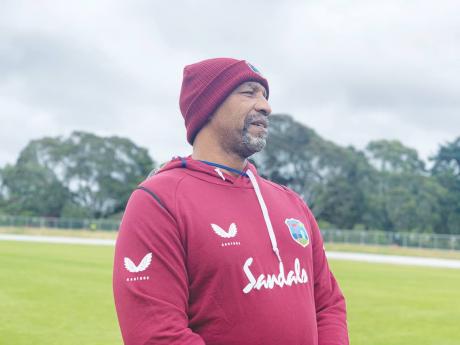 West Indies head coach Phil Simmons says the fringe players who are on the current tour of Bangladesh can cement their place permanently in the senior side if they show the right attitude and performance.

Simmons made the statement following a media conference yesterday, where the Cricket West Indies management announced that all members of the touring party returned their first negative COVID-19 tests on arrival in Bangladesh.

With several senior players absent from the tour, Simmons believes some of the first-timers in the squad can play a more significant role, with a plethora of cricket to be played in the Caribbean this year, with Australia, Pakistan, Sri Lanka and South Africa set to tour the region.

FIGHT FOR YOUR PLACE

“Attitude and performance are the two things I am looking for from the players when they come into a team. My message to the players here is that they are not here to fill in, they are here to give themselves a chance to seal a place in this team,” said Simmons.

“If you do well in the three games and the Test matches, you are putting yourself in a place where nobody can move you,” added Simmons.

The Trinidadian coach says the extended squad in the last two series has given the coaching the staff the latitude to look at more players and widen the player pool across all formats.

“When we went to England we carried 25 players, and we have seen a couple of young players, including the two that made their debut in New Zealand, come through from that,” he said. “This opens up the pool, and some of the places are in the players’ hands. If they do well here, they can put themselves in line to play most of these series coming up.”

The West Indies are set to undergo their first practice session later this week ahead of the first one-day warm-up game in Savar on Monday.

The first One-Day International will bowl off two days later in Dhaka, and Simmons is expecting his troop to start positively, as a win will boost their chances of claiming a rare series win on Bangladesh soil.

“Every team around the world plays well at home. It’s going to be a hard series, but the first aspect is to win the series, and the second is to make sure we prepare well and give the players the best opportunity to perform,” added Simmons.