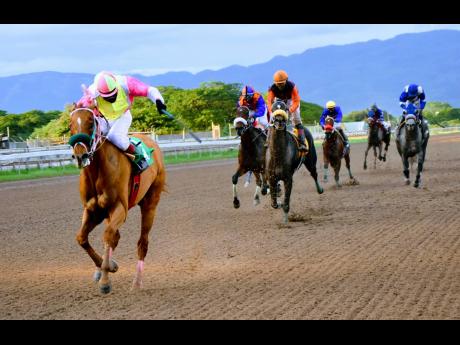 JAMAI RAJA turned for home chasing MAHOGANY in back-to-back races and need not run another race to prove he is back to form and a top contender in the open allowance at six furlongs today.

Interestingly, JAMAI RAJA co-champion rider Dane Nelson’s second call on the overnight programme with PATRIARCH being his first choice in the 13-horse field, keeping journeyman Devon A Thomas aboard the rejuvenated eight-year-old gelding.

Nelson partnering PATRIARCH, one of two Fitzgerald Richards runners, casts doubts on the stablemates, especially GOD OF LOVE, who has Christopher Mamdeen aboard.

PATRIARCH won six races from eight starts in an 11-month span, ending last September, before embarking on a three-month lay-up. He weakened inside the last furlong off the lay-up on December 27, finishing next-to-last behind TREVOR’S CHOICE, raising questions as to why Nelson isn’t aboard GOD OF LOVE, who won in a sub-12 time at the distance on November 14.

GOD OF LOVE offered no resistance when brushed off the lead by MAHOGANY at six and a half furlongs on last, giving way to JAMAI RAJA, who chased to almost the final furlong. He reports three pounds heavier with Mamdeen at topweight and could be found wanting in the closing stages of what is expected to be a cracking pace.

Both Richards’ speedsters appear suspect, turning the spotlight on fit middle-distance runners such as JAMAI RAJA and FATHER PATRICK, who dominated the pace impressively on last, using his mid-race speed to pull away from slower rivals at six and a half furlongs.

Though FATHER PATRICK will be asked early questions early at the shorter trip among quicker runners, he has the class and weight to repeat, plus he galloped a bullet work at exercise last Saturday. Champion apprentice Oshane Nugent is also bang in form and has the patience to track the speedsters before making his move.

However, JAMAI RAJA could have found a sweet spot at six furlongs to get first run on FATHER PATRICK. He has the speed to make a crippling move, which could catch FATHER PATRICK flat-footed.