Walsh out after positive COVID-19 test 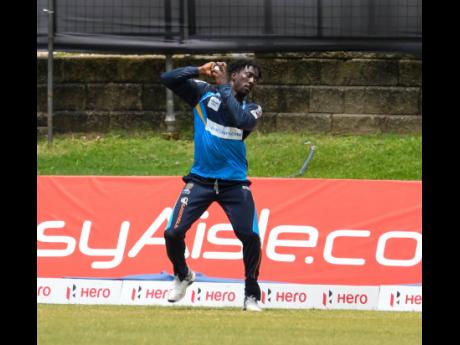 West Indies’ tour here was thrown into turmoil Thursday after leg-spinning all-rounder Hayden Walsh Jr tested positive for COVID-19, less than a week before the start of the three-match One-Day International (ODI) series.

Along with all members of the West Indies contingent, the 28-year-old Walsh tested negative before departing the Caribbean last week and again on arrival here on Sunday.

However, his second test on Wednesday returned positive and another test subsequently carried out on Thursday verified the positive result.

Walsh, who is asymptomatic, will now enter a period of self-isolation and has been ruled out of the one-day series starting here on Wednesday.

He is the first West Indies player to test positive for the novel coronavirus while on tour, since international cricket resumed last July after a lockdown.

West Indies toured England for three Tests in July and then travelled to New Zealand last November and December for three Twenty20 Internationals and two Tests,

Both tours were safely executed.

A Cricket West Indies (CWI) statement said Thursday the squad had been isolating in their respective rooms since their arrival and therefore had no contact with Walsh.

“The West Indies touring squad has been in individual isolation since arriving in Bangladesh and so there has been no contact between squad members since arrival,” CWI said.

“In accordance with the established medical protocols, Walsh remained isolated from the West Indies squad and is now under the care and supervision of the team physician, Dr Praimanand​ Singh.

“All other members of the West Indies touring squad returned second negative COVID-19 tests, after undergoing four tests within the last 11 days.”

Walsh will have to first return two negative tests before being released from isolation.

With 10 ODIs under his belt, Walsh is one of only six players on the 15-man squad with ODI experience, after several first-choice players opted out of the January 20 to February 15 tour due to COVID-19 concerns.

The withdrawals, headlined by skipper Kieron Pollard and Test captain Jason Holder, forced selectors to pick a second-string squad for the tour.

COVID-19 also ruled fast bowling all-rounder, Romario Shepherd, out of the series, the Guyanese testing positive before departure from the Caribbean.

Walsh’s positive test will heighten concerns over the tour for which 10 leading players declined selection owing to their fears over the situation in the country.