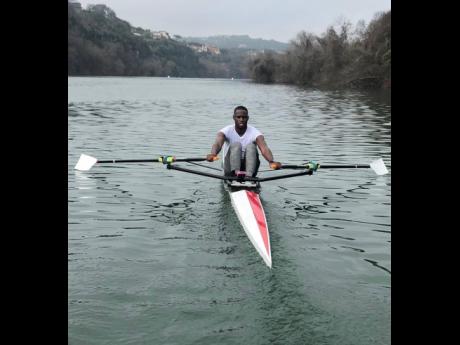 As national rower Shahiede Patterson refocuses his efforts to qualify for the rescheduled Tokyo Olympic Games, he says that the unexpected additional preparation time has left him in a better position to challenge for that debut Olympic berth.

At this time last year, Patterson, 21 years old, left for the United States for training in pursuit of his goal of becoming the country’s first Olympic representative in rowing. Two months later, those ambitions were deferred as the coronavirus pandemic postponed his Olympic qualifying event in Brazil as well as the Tokyo Games itself, which forced him to return home before the travel restrictions took place last March. Despite the initial disappointment of having to wait another year to attempt to make history for Jamaica, Patterson says that he has managed to turn it into a positive.

“At first, it was a little bit depressing because you are preparing now, you are a few weeks away, and then just like that you heard that it’s not going to happen,” Patterson told The Gleaner. “But after you sit back and you really think about it, you are saying, ‘I can use it to my advantage. It gives us more time to prepare to do better.’ So, it was more like that for me.”

Patterson resumed training last August but has recently intensified his preparations in the Kingston Harbour and is also doing additional gym work as he now works towards the rescheduled qualifying event now set for March in Rio de Janeiro, Brazil. Patterson says that the additional time has been used to gauge his level and to make improvements.

“It has been definitely good,” he said. “I have gotten the chance to get more time on the water. I’m trying to build the intensity more and more every time that I go out just to get better every time.

“It has given me more experience, probably not with races, but with more time on the water, more time understanding myself, and to see where I can do better.”

Similar to other athletes, his preparations are done amid uncertainty over the staging of the Tokyo Olympics, which was pushed back to this July. Tokyo and its surrounding provinces are under a second state of emergency as COVID-19 cases and fatalities increase, increasing concerns that the Olympics would be cancelled if the situation does not improve.

Despite the uncertainty, Patterson says that he is committed to controlling his own readiness for the qualifier, emphasising that the overall mission to increase the sport’s profile nationally would not change if the Tokyo games were cancelled.

“I have to focus on step one, which is qualifying, so that is my premier focus right now,” he said.