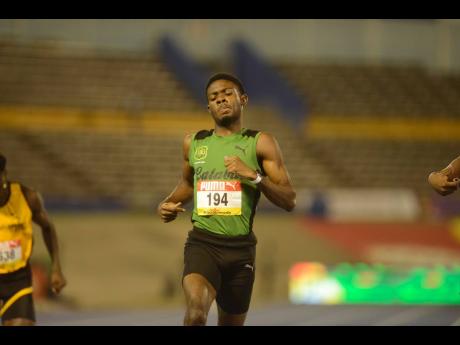 CHRISTANIA Williams, Christopher Taylor, and Andre Ewars had good showings at the American Track League meet at the University of Arkansas yesterday.

All three had top-three finishes in their respective events.

In the first of four meets as part of the World Athletics Silver Tour, Williams, the 2016 Rio Olympic Games 100m finalist, finished a close second in the women’s 60m in 7.18 seconds. Williams, who advanced to the final with the fastest time after winning her heat in 7.18 seconds, was out of the blocks quickly but was caught late by the fast-finishing Blessing Okagbare of Nigeria, who won in 7.17s, as Kayla Whyte of the United States (US) was third in 7.29s.

Running his first competitive race in over two years, former Calabar High School quarter-miler Taylor ran a courageous first 300m in his heat of the 400m to finish second in 45.93s. US’ Fred Kerley won in 45.73s while his countryman, Travean Caldwell, finished third in 46.25s.

Ewars, who competed for Jamaica in the 200m at the 2019 World Athletics Championships, finished third in the men’s 60m sprint among a strong field. Ewars clocked 6.67s as countryman Omar McLeod ended sixth in 6.70s. The event was won by American Trayvon Bromell in a world’s best of 6.48s, with Nigeria’s Divine Odudur finishing second in 6.65s.

Jamaica had another finalist on the day as sprint hurdler Britany Anderson took fourth in the women’s 60m hurdles behind winner Tonea Marshall, who clocked 7.86s.

The meet was highlighted by a world record mark in the men’s shot put as American Olympic gold medallist Ryan Crouser had a heave of 22.82m, with his first attempt, to break the mark of Randy Barnes set in 1989.

The second leg of the tour will take place at the same venue on Sunday.