Let us compete! - Fraser-Pryce voices frustration on the delay of the resumption of sports 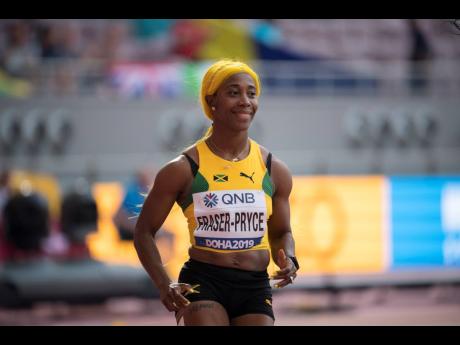 The snag Jamaica’s sporting fraternity is currently experiencing because of the COVID-19 pandemic has left many of its players restive, including World and Olympic champion Shelly-Ann Fraser-Pryce, who has voiced her frustration in a lengthy Facebook post.

Fraser-Pryce, who is hunting her third Olympic 100m title at this summer’s Olympics, seems to have been triggered by the recent spike of coronavirus cases, which threatens to further delay the resumption of athletic events.

“Some stakeholders in the national conversation have bluntly said that in light of the spike of COVID-19 cases in Jamaica, Government should hold off on granting permission to prospective sporting events holders …. While I do not wish to make a political statement, from a point of view of good sense and logic, the perspective that the process established whereby permission for the holding of sporting events should be suspended, is a perspective not shared by the majority of invested parties,” stated Fraser-Pryce. “There is no evidence at all that sporting events, which have no spectators, have contributed to or are likely to contribute to further spike in COVID 19 cases locally.”

Before the recent spike, coaches and athletes were looking to grace the track again this weekend after the Government announced eight days ago that athletic meets were allowed to resume on a scaled-down basis. But, that anticipation was quickly stifled when the island broke the record for a single day number of positive cases three consecutive times in four days.

The development forced the Jamaica Athletics Administrative Association’s hierarchy to call off meets which were expected to be held this weekend, as they were not given the green light from the Government.

“I do not think it is beyond us to separate elite athletes and limit the number of competitions per track and field meets, while at the same time allowing some meaningful resumption events,” Fraser-Pryce added. “It must be noted that recently (last summer) well-known track and field entrepreneur Bruce James held a series of meets and there were no positive COVID-19 tests.”

She continued: “I urge the authorities to bear in mind that many participants in the sports industry cannot go overseas to compete. The mandatory two weeks quarantine requirement upon return is not feasible, and there’s no funding mechanism in place to assist those who are struggling badly due to a lack of finances.”

The frustration has even forced athletes to start a campaign on social media called #StandWithJamAthletes. In a poster that has been making the rounds on social media, athletes say: “Allow us to compete, the competition site is safer than the beaches & supermarket.”

Fraser-Pryce wants the authorities to rethink suspending the start of the season as it is having serious repercussions on the livelihood of many in the industry.

“Proper structures, which include testing and adherence to protocols, have also been put in place overseas to accommodate the hosting of contact sports ... I am confident it is not beyond us here in Jamaica to put in place similar systems to limit the risk of spreading COVID-19 while at the same time allowing for reasonable resumption on the sports industry, which has contributed so much to Brand Jamaica,” she explained.

“It is my view that in the interest of the athletes, along with the national and global psyche and the thousands who depend on the industry, we should strongly resist talk of ‘hold off’ on the process allowed for a formal but controlled and safe resumption of sporting events.”