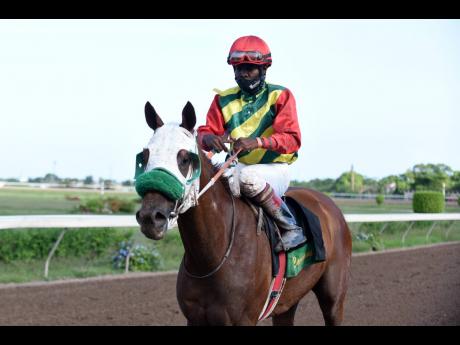 Down to carry 130lb against second-tier runners led by in-form FATHER PATRICK, Nunes used Spencer's nine-pound claim to cushion the handicaps at 121lb, unlike Gary Subratie, who sent out late-charging SENTIENT with 126lb under Dane Nelson in the six-and-a-half furlong contest.

Straightening as a team with GOD OF LOVE, chasing PATRIARCH, ENGLAND'S ROSE and HARRY'S TRAIN, TOONA CILIATA closed willingly to grab his 11th career win in a driving finish, staying on strongly in the stretch run to fend off challengers, including FATHER PATRICK, who had loomed large on the outside inside the final furlong, eventually claiming fourth.

A game GOD OF LOVE went down battling, finishing a neck ahead of speedster ENGLAND'S ROSE, who ran a brave race but was never allowed to settle on the lead down the backstretch, as she would have liked, overtaken by PATRIARCH, who carried the nine-horse field into the lane in splits of 22.4 and 45.4.

Javaniel Patterson emerged the day's top jock with two winners, KATALINA in the second and LADY CARMEN in the fourth.

Injured Oshane Nugent would have certainly extended his lead atop the jockeys' standings as two of his mounts, CELEBRATION and BATTLE DANCER, won with replacement riders, Reyan Lewis and Youville Pinnock, respectively.

Nugent was injured in an exercise-morning spill on Friday and will also miss the Ash Wednesday midweek holiday meet.