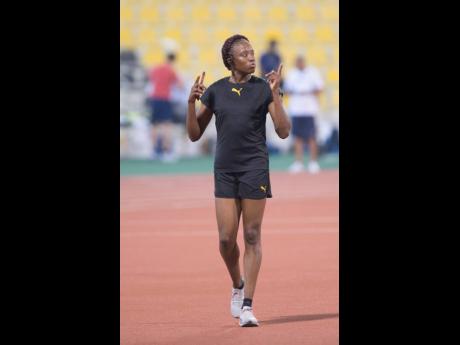 Williams, who two weeks ago was disqualified for false-starting in the final of the women’s 60m hurdles at the Clemson Invitational Meet, made up for that disappointment at the same venue.

Competing at the Clemson Tiger Paw Invitational, Williams won the event quite easily in a season best 7.87 seconds. She became the fastest Jamaican in the event so far this season after overtaking former World Under-20 champion Britany Anderson, who clocked 7.95 seconds a week ago in the preliminary round of the event in Arkansas.

Nelson, who was representing the University of Oregon, continued her dream season in the sprints with a big win in the women’s 60 metres at the Tyson Invitational Meet in Arkansas, Fayetteville.

Former Edwin Allen High School star Kevona Davis, competing for the University of Texas, had to settle for sixth in 7.35 seconds. Earlier in the preliminary round, she clocked a personal best 7.29 seconds to finish second.

Also in Arkansas, 2018 World Under-20 110m hurdles gold medallist, Damion Thomas, suffered his first defeat of the season with the Louisanna State University man finishing second in a season best 7. 69 seconds in the 60m hurdles, which was won by Trey Cunningham of Florida State University in an impressive season best of 7.55 seconds. Former Jamaica College hurdler, Phillip Lemonious, ran fourth in a personal best 7.72 seconds.

Two other Jamaicans had good results at the meet despite missing out on top-three spots.

Competing for the University of Texas, former St Elizabeth Technical High School quarter-miler Stacy-Ann Williams was fourth in the women’s 400m in a season best 52.50 seconds, while former Manchester High and The Queen’s School hurdler Daszay Freeman logged a season best 8.16 seconds for a fifth-place finish in the women’s 60m hurdles final for the University of Arkansas.