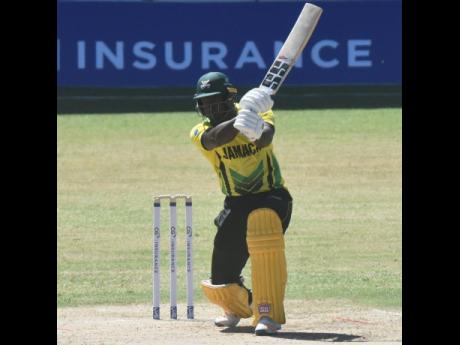 The Jamaica Scorpions will be going all out to avoid elimination from the Cricket West Indies Regional Super50 tournament when they take on the Leeward Islands Hurricanes at the Sir Vivian Richards Stadium in Antigua today at 8 a.m. Jamaica time.

The winless Scorpions will be hoping to get the better of the Leeward Islands Hurricanes, who are on four points with just their game against the Scorpions to play.

This is the scenario that assistant coach Nikita Miller is hoping will unfold.

After a meeting with the players, head coach Andre Coley is urging his unit to carry out the plans he has directed.

“If you talk to the guys, they will recall the plans to you and tell you what is supposed to happen and when,” Coley said. “It now comes down to more communication on the field when things are happening, and if plans are not really going as we have discussed, somebody needs to step up and reinforce those plans.”

The Scorpions have had an indifferent time with the bat in the three games they have played, scoring over 250 runs in their opening contest against the Trinidad and Tobago Red Force, then folding for 190 against the Guyana Jaguars, and 168 against the Windward Islands Volcanoes, where their innings did not even last 50 overs.

The opening position has been an issue for the Scorpions, and Brandon King and Aldane Thomas may be asked to continue in that role with captain Rovman Powell and Andre McCarthy providing the solidity in the middle order.

The bowling department could see the return of Sheldon Cottrell and Oshane Thomas, who missed the last game due to niggling injuries.

The Leeward Islands will be hoping that their opening duo of Kieran Powell and Ross Powell can spark once more, with century-maker Kacey Carty and Canadian batsman Nitish Kumar.

Their bowling will be centred on medium-pacer Quinton Boatswain, who is the leading wicket-taker in the competition so far with nine scalps.