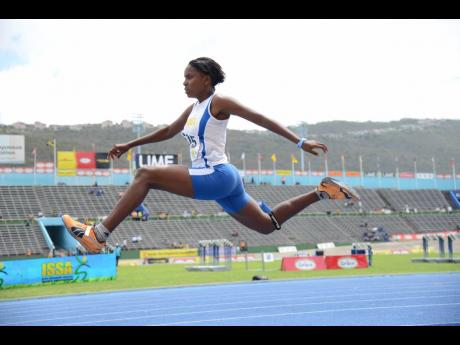 With the COVID-19 pandemic creating uncertainty, triple jump prospect Shardia Lawrence has set her sights on long-term goals and on becoming one of the best in her event. Lawrence has devoted herself to improving her technique and she is optimistic...

With the COVID-19 pandemic creating uncertainty, triple jump prospect Shardia Lawrence has set her sights on long-term goals and on becoming one of the best in her event. Lawrence has devoted herself to improving her technique and she is optimistic about the future.

Based in Chicago, the 25-year-old said recently, “I believe I can be something great, the next top thing for Jamaica. I just need the proper coaching and [to] perfect my technique.”

With her days at Kansas State University behind her, Lawrence’s quest for better technique is being directed by Greek coach Andreas Pavlou, who helped American Tori Franklin move from 13.49m in 2014 to 14.84m in 2018.

He also coached Troy Doris of Guyana to the Commonwealth Games gold medal in 2018.

“Given the circumstances that’s been happening now, I’m not even focusing on short-term goals, it’s long-term goals because I have a lot to learn,” Lawrence said.

Pavlou has pinpointed areas for refinement.

“The speed is not a problem, but in the weight room and the technical aspect, he said, I’m way behind in contact on the ground,” Lawrence said of what needs improvement.

“They told me that you need a professional coach that will be there 24/7 to be successful and to dial in, focus on certain aspects of the event for me to be great,” she said.

Naturally, she thinks the world of Ricketts and Williams.

“I love both Kimberly and Ricketts, they have a great heart,” she said. “I’m really proud of Ricketts, I’m not going to lie, because we went to high school together and coming out of high school, she only jumped like 12.2m, something like that, and to see her rise like that, rise to the occasion, I was like wow,” she said as she recounted the progress of her former teammate from 12.29m at Vere Technical High School to 14.93m.

“She is a big motivator because I knew Kimberly already had the talent, and knowing that ‘Slims’, she came from nothing to something, that’s just amazing and I admire that.”

She predicted more success for Jamaica in the triple jump. She named her former Vere colleague Sabina Allen and Rhianna Phipps, recently of Hydel, as part of the wave of the future.

“We have rising ones that are coming like Rhianna Phipps, because my coach got her now and she has a huge talent,” Lawrence said. “I’m telling you, and I know she’s going to be great as well.”

Phipps is now at Kansas State under the guidance of coach Vincent Johnson.