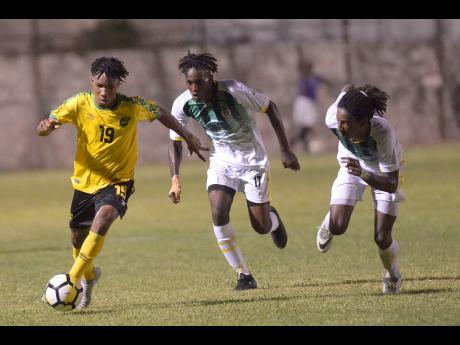 Brimming with excitement and confidence regarding Jamaica’s prospects of qualifying for the FIFA World Cup next year, national midfielder Ravel Morrison says that teammate Tyreek Magee has what it takes to play in the English Premier League (EPL)...

Brimming with excitement and confidence regarding Jamaica’s prospects of qualifying for the FIFA World Cup next year, national midfielder Ravel Morrison says that teammate Tyreek Magee has what it takes to play in the English Premier League (EPL) in the future.

Morrison, 28, was speaking on the ‘Vibe with Five’ podcast with former England and Manchester United defender Rio Ferdinand recently on the lack of stability in his club career, as well as his time with Manchester United.

After a five-year courtship, Morrison made his Reggae Boyz debut last November in the two-game international series against hosts Saudi Arabia. Morrison said that not only was he impressed and excited about the quality of the players during his first national team camp, but he also discussed the prospects of Magee who belongs to Belgian club KAS Eupen.

“We’ve got wicked players,” he said. “When I went over there [Saudi Arabia], you don’t expect some players to be as good, but we have a young player called Tyreek Magee.

“Wicked, wicked player. I think he could come to the Premier League, man, and dominate. He’s like a little David Silva.”

Magee, 21, featured in both international games against the Saudis in Riyadh, appearing twice as a second-half substitute. He is now in Eupen’s reserves, but said in an interview last May that he hopes that he will get the opportunity to feature for the first team.

Morrison also highlighted players such as Fulham’s Bobby Reid, Bayer Leverkusen’s Leon Bailey, and Preston North End’s Daniel Johnson as key players for the team. Additionally, he said that it would be a great feat for him personally if he was able to help Jamaica qualify for the finals for the first time in over two decades.

“If you can get Jamaica to the World Cup, I think it’s a massive achievement.”

Jamaica remains in 47th place in the world in the latest FIFA/Coca Cola rankings released on Thursday, as well as third in Concacaf. The final round of the World Cup qualifiers is scheduled to start this September, after their participation in the Concacaf Gold Cup in July.