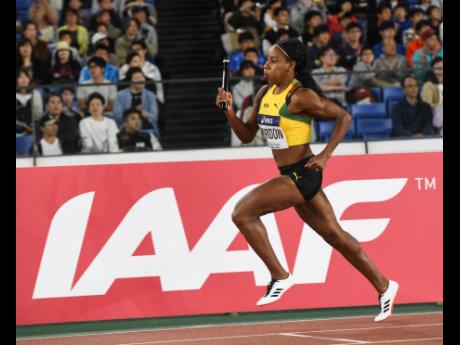 Danielle Williams, the 2015 World Champion in the 100m hurdles and 2015 World Champion 4x400m relay athlete Chrisann Gordon will compete tomorrow in the fourth and final leg of the American League series at the Randal Tyson Track Centre in Fayetteville, Arkansas.

Williams, 28, will make her third appearance this season in the women’s 60m hurdles and will be hoping to better her season’s best of 7.87 seconds done a week ago at the Tiger Paw Invitational in Clemson, South Carolina.

MAKING UP FOR DISQUALIFICATION

Williams, who was disqualified for a false start in the final of the event at the same venue two weeks ago, is the fourth ranked athlete in the world this season and will face world number three Tonea Marshall of the United States. Marshall won the event in the first series a month ago in 7.86s. She will be hoping to make up for her disappointment two weeks ago at the same venue where she was disqualified for false-starting in the preliminary round of the event.

Gordon will look to start her indoor season in the women’s 400m on a high and will face Americans Shamier Little and Shakima Wimbley.

Little, who won the event with a personal best 51.33s at the last meet two weeks ago, is ranked number four in the world. Trinidad and Tobago’s Sparkle McKnight is also entered in the event.