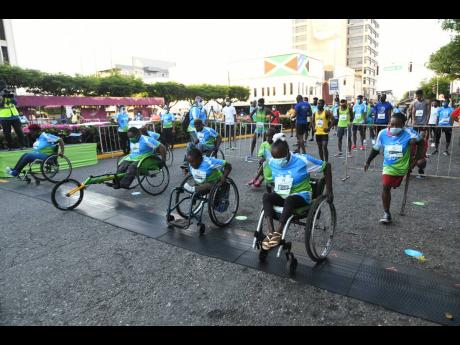 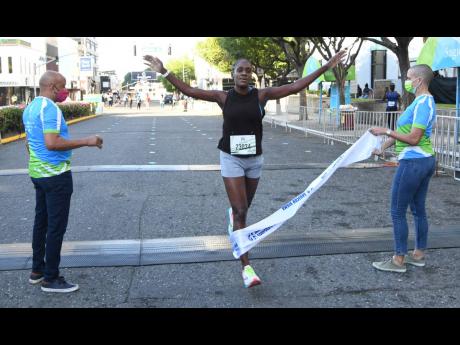 Venson was entering the event for the first time.

“I am grateful for my victory knowing that I have been training very hard,” he said. “I did not expect to win that easily, but I knew that the hard work was done in training, and I would like to thank all those around me who encouraged me to enter the race.”

After a third-place finish a year ago, it was a happy feeling for first-time winner Harris, of Jamdammers Club.

“I am very happy to be back on the road running again, and I would like to thank Sagicor for pushing to have this event,” she said. “I felt lonely in the early part of the race with the limited number of participants, but afterwards, I felt good.”

Unlike in years past where thousands participated, this year’s race was of a different nature because of COVID-19.

The event, which started and ended at Knutsford Boulevard in St Andrew, did not feature a walk race this year.

Forty-five persons took part in the men’s race while 36 competed in the female event, and eight featured in the wheelchair race.

Athletes were placed six feet apart at the start because of pandemic protocols, with wheelchair athletes starting first, followed by the males starting five minutes later and females 30 minutes after.

World Athletics double Under-20 sprint champion Briana Williams said she was proud to be the meet’s patron this year.

“I am really happy to be a part of this knowing that Sagicor is doing something great for people in need,” she said.

Organisers raised $42 million this year to aid the Annotto Bay Hospital and the Port Antonio Hospital as well as the Get Back on Track Educational Programme. Although the target was missed by $8 million, Sagicor Life Jamaica Executive Vice-President Mark Chisholm was still pleased.

“Once again, we have pulled off a master act,” he said. “We have raised over $42 million, and this is huge in this pandemic period, in an environment in which the country is struggling economically because of COVID-19. We believe in helping, and at the end of the day, it is very important in giving back to the community in which we operate in Jamaica and the Caribbean. I feel proud that our company was able to pull off another Sigma Run as sports, health, and education are very important to us.”