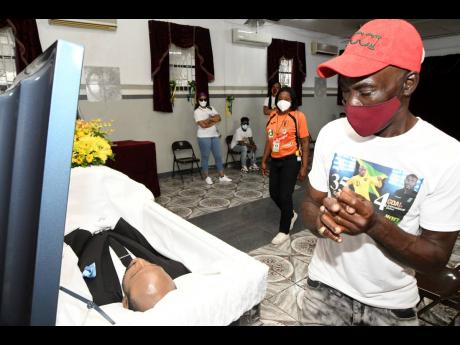 Rudolph Brown
Rudolph Brown/Photographer A man views the boby of Luton Shelton at the House of Tranquility Funeral Home on Orange Street, in Kingston on Wednesday, February 24, 2021.

Bobbette Shelton, the wife of leading Reggae Boyz goal scorer, Luton Shelton, said she was pleased the striker was able to feel the love and affection of the nation and the football fraternity before his passing on January 22.

Bobbette, who attended the final viewing of Shelton's body along with family members at the Tranquility Funeral home in downtown Kingston yesterday, told The Gleaner that she was touched by the love and appreciation her husband received from the Jamaican football public throughout his illness.

"I am happy that before he passed, he knew exactly how much he was loved. It was known out there that he was ill, but the support was tremendous and I am happy for that. I want to thank everybody from across the world for the support, love and admiration for this prolific footballer," Bobbette commented.

She is also happy that the public got the chance to say their final goodbyes to one of their favourite sons.

"I am happy people could get the chance to see him for the last and pay their respect, even though it is not something we are accustomed to, at least they got the opportunity to do so," she added.

President of the Jamaica Football Federation (JFF), Michael Ricketts, said the federation is still grieving at the loss of an 'icon'.

"We have lost someone who would have contributed so much to the sport of football and would have been an example to not just kids in Kingston and St Andrew, but all over Jamaica and I hope he will motivate some youngster to be like another Shelton," Ricketts stated.

Harbour View general manager, Clyde Jureidini, was also pleased with the outpouring of love the former player received during his troubled times.

The funeral service for the late Luton Shelton will take place, online on Thursday morning starting at 9.30.am. He was 35 years old at the time of his passing. He is survived by his mother, wife and two children.

Most attendants at yesterday's viewing wore t-shirts with R.I.P.L.S 21 written on the back.