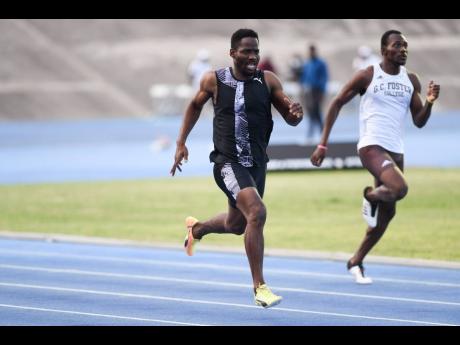 File
Rusheen McDonald (left) winning the men’s 400m in a time of 46.49 seconds at the Velocity Fest track meet held at the National Stadium on Saturday, August 8, 2020. 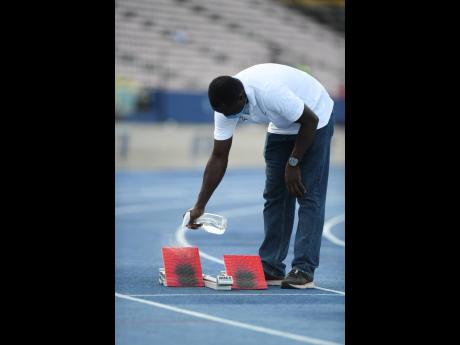 File
An official sprays a starting block with what appears to be sanitising liquid at the Velocity Fest track meet, held at the National Stadium on Saturday, August 8, 2020.
1
2

Local athletics stakeholders are breathing a collective sigh of relief, while issuing a word of warning ahead of this weekend’s return of competitive track and field, which arrives after weeks on inactivity and two rejected protocol proposals. The...

Local athletics stakeholders are breathing a collective sigh of relief, while issuing a word of warning ahead of this weekend’s return of competitive track and field, which arrives after weeks on inactivity and two rejected protocol proposals.

The Jamaica Athletics Administrative Association (JAAA) confirmed that it has received approval from the Ministry of Sport, Ministry of Health and Wellness, and the Ministry of Local Government and Rural Development to stage a series of qualification meets for junior and senior athletes, with the first meets set to take place this Saturday.

Maurice Wilson, head coach at the G.C. Foster-based Sprintec Track Club and senior member of national coaching panels to the Olympic Games and World Championships, welcomed the news, but warned stakeholders to respect the protocols put in place.

“I think the Government has made a decision in the interest of the sport and would have analysed the situation. However, we as stakeholders would have to make sure that we do all within our power to maintain the protocols so people can compete in a safe environment,” Wilson said. “I know it is a very difficult decision, because there is a thin line between the spreading of the virus and persons maintaining good health, and also to give athletes and sports administrators the opportunity to do their work.”

No spectator will be allowed at the meets and each venue will host specific events, with sanitisation breaks scheduled to take place between sessions. Practices such as bib sharing will be outlawed to minimise contact, while athletes will be required to sign a waiver, with those under 18 years of age required to present a waiver signed by their parent or guardian. Waivers are available for download on the JAAA’s website.

“We are very excited at the possibility of a return to official athletic competition locally. With just about four months left for qualifying for the Olympic Games, and all other nations globally having a chance to compete regularly, we are at a disadvantage and in threat of losing our place in the upper echelons of world athletics,” said MVP Track Club and national senior coach Paul Francis. “However, the safety of the country comes first, and I am hoping that we all understand that with this approval comes responsibility each to his fellow man, fellow coach and fellow athletes. We have a collective responsibility in ensuring that we can continue to compete. I am very happy that the many professional athletes living in Jamaica can finally get a chance to work.”

With the ISSA/GraceKennedy Boys and Girls’ Athletics Championships set to make a return in April after being cancelled in 2020, top high school coaches Michael Dyke, from defending girls champions Edwin Allen, and Leaford Grant, from boys champs Kingston College, were also thankful for the development.

“It’s a little late in the season, but better late than never, as the boys will be elated. Training without competition is very demotivating for the youngsters. We now look forward for the continued development of Jamaica’s track and field,” said Grant.

“This is really great news, despite the fact there is a serious spike with the virus and a lot of risks still exists. But these kids stopped competing since March last year and are getting restless now. So let us follow all the health protocols and compete fiercely but safely,” said Dyke.