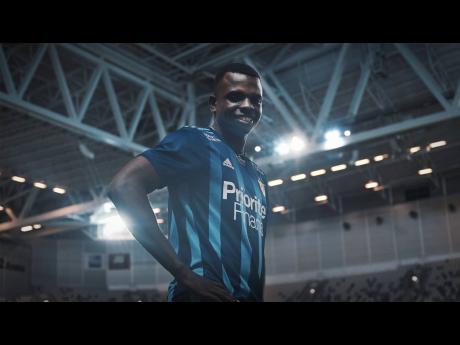 Former McGrath High schoolboy player Peter McGregor says that he is determined to prove his worth at the next level, following his long-awaited move to Europe.

The 20-year-old has signed a one-year deal with Swedish club Djurgården of the Allsvenskan League, the country’s top-flight division, with an option to extend. McGregor was unveiled by the club on Monday and, according to their website, was expected to participate in his first training session yesterday.

McGregor spent three years at McGrath High from 2017-2019 and played a role in the school’s run to the daCosta Cup semi-finals in 2019. Crediting the development of his fighting spirit and never-say-die attitude to his time at the Linstead-based institution, McGregor says that he is relishing the chance to test himself in Europe.

“Playing at McGrath taught me how to fight because we were never one of the top-tier teams in schoolboy football, so we had to fight hard and play as a team,” McGregor told The Gleaner. “I feel very humbled, because I know how few people will ever get this kind of opportunity, coming directly from Jamaica.”

It is an opportunity that has taken more than a year to finalise, according to his agent, Kevin Cowan, because of the restrictions posed by the COVID-19 pandemic. He says that the Swedish championship is the ideal place for him to begin his European journey, particularly at a club that has a proven track record of developing young, talented players.

“Peter has tremendous physical attributes that are tailor-made for European football. However, I’m most impressed with his strong mentality, his humility and his willingness to learn,” Cowan said.

It is a mentality that McGregor says he is committed to transferring over to Europe as he battles to earn playing time.

“At this moment, my singular goal is to prove to everyone at the club that I belong here. I intend to achieve this objective by working hard and being fully focused,” McGregor said.

His former high school coach, Jermaine Thomas, who has watched his development, first at Waterford High and then at McGrath, said that he is overjoyed with McGregor’s opportunity and believes his physical and technical attributes will allow him to excel once he adapts to his new environment.

“I am really happy to see this coming through, to see everything revealing (itself), and him making that big step; words can’t really express,” Thomas said. “I think once he gets settled down in Europe, persons will see the kind of mettle that this youngster has, because he is definitely a monster.”

Djurgården sporting director Bosse Andersson described McGregor on the club’s website as a promising talent that will be exciting to follow.