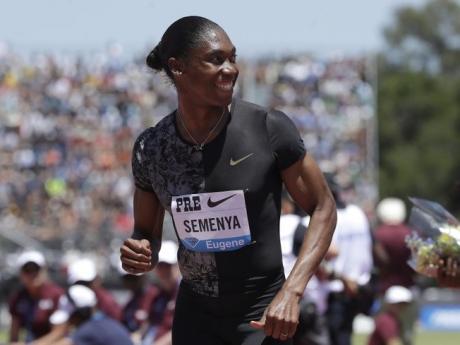 CAPE TOWN, South Africa (AP) — Caster Semenya is going to the European Court of Human Rights to challenge “discriminatory” rules that prohibit her from competing in certain track events because of her high natural testosterone, her lawyers said Thursday.

The two-time Olympic champion in the 800 meters has already lost two legal appeals against World Athletics’ regulations that force her to medically lower her natural testosterone level if she wants to run in women’s races from 400 meters to one mile.

The South African’s lawyers said there’s been a “violation of her rights” and wants the human rights court to examine the rules.

Semenya has one of a number of conditions known as differences of sex development.

Although she has never publicly released details of her condition, World Athletics has controversially referred to her as “biologically male” in previous legal proceedings, a description that angered Semenya.

Semenya has the typical male XY chromosome pattern and levels of testosterone that are much higher than the typical female range, World Athletics says.

The track and field body says that gives her and other athletes like her an unfair advantage over other female runners.

She says her testosterone is merely a genetic gift.

The regulations have been fiercely criticised, mainly because of the “treatment” options World Athletics gives to allow affected athletes to compete.

They have one of three options to lower their testosterone levels: Taking daily contraceptive pills, using hormone-blocking injections, or having surgery.

“The regulations require these women to undergo humiliating and invasive physical examinations followed by harmful and experimental medical procedures if they wish to compete internationally in women’s events between 400m and one mile, the exact range in which Ms Semenya specialises,” Semenya’s lawyers said.

World Athletics, which was then known as the IAAF, announced in 2018 it would introduce the rules.

Semenya challenged them and lost at the Court of Arbitration for Sport in 2019.

She also lost a second appeal to the Swiss Federal Tribunal last year.

That second case will be central to her appeal to the European Court of Human Rights.