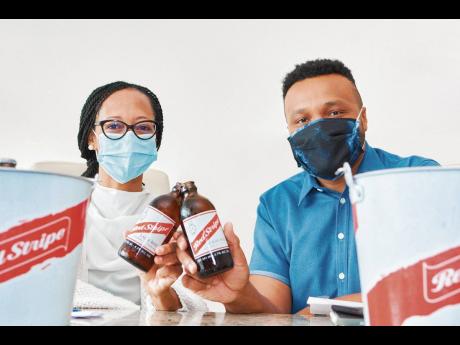 Long-time football sponsor Red Stripe has indicated its continued commitment to the sport with a new sponsorship agreement with the Jamaica Premier League (JPL), powered by Digicel.

The announcement of the beer company’s support of the newly-rebranded league, came on Wednesday, with an official inking of the deal at The Jamaica Pegasus hotel. Red Stripe, a category sponsor, is therefore the “official beer of the JPL”.

“For the past 10 years, Red Stripe has shown strong commitment to Jamaica’s football and we will continue as a sponsor of the Jamaica Premier League. We’ve always wanted what is best for the league and so we are aligned to the new approach to sponsorship, which allows more companies to be involved in an inclusive way. As long as football is the ultimate champion, it’s a win for all the young players and clubs across the country,” said Nathan Nelms, Red Stripe brand manager.

Acting general manager of Professional Football Jamaica (PFJ) Arlene Martin added, “The question that so many people had is now answered. Professional Football Jamaica is truly excited that Red Stripe is continuing its partnership, for the further development of football in Jamaica, with their sponsorship of the Jamaica Premier League. Red Stripe has played a significant role in shaping our football product and will continue to play their part in supporting national development.”

Nelms disclosed that Red Stripe remains the exclusive beer sponsor of the JPL, powered by Digicel, and promised that the brand’s presence would be felt.

“Football is one of our major platforms and the Premier League has provided us with an opportunity to connect with our consumers and impact communities, including the players over the years. We value this partnership and the opportunity to support the development of the sport and local players. We are still the exclusive beer of the league and we will ensure that we show up in true Red Stripe fashion,” said Nelms.

“Football fans know that there is nothing like a good match and a cold Red Stripe in hand, whether you’re in the stands or watching from home. We’re truly excited about a couple of things we’re working on for our consumers who want to chill and watch top flight football from the comfort of their homes,” said Nelms.