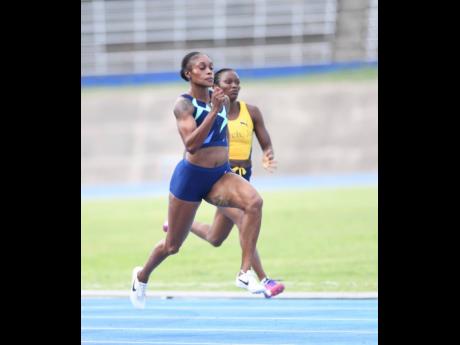 After weeks of inactivity, the country’s top senior athletes will finally get a chance to ply their trade, after the Government’s midweek decision to approve competition locally, with over 200 senior competitors set for action inside the National Stadium tomorrow at one of eight Jamaica Athletics Administrative Association (JAAA) qualification meets taking place across the island.

All the top outfits, including the recently formed Legacy Track Club, will be well represented tomorrow, and chairman of World Class Athletics Limited, Bruce James, who is also one if the meet managers, is very pleased with the overwhelming response from the athletes.

“It is a clear pent-up indication of the desire, of the demand of these athletes who want to compete,” said James. “World Class Athletics is pleased to be associated with this event, especially with the new factor of contactless access.

“Athletes along with officials, including the media, can only enter inside the National Stadium with electronic accreditation, as this does not allow contact with other individuals,” James informed.

World Championships long jump gold medallist Tajay Gayle of MVP Track Club will lead the male charge as he will compete in his pet event, with Ramone Bailey looking to create an upset.

A keen battle is expected in the men’s 60m, as the experienced Asafa Powell, the man with the most sub-10 seconds clocking in the 100m, will take on Andrew Fisher of Sprintec and Trinidadian Emmanuel Callender, who will be representing Swept Track Club.

Other notable entrants among the males include Great Britain’s Zharnell Hughes of Racers in the 100m, which also features the likes of Oshane Bailey of Sprintec and former Calabar High sprinters, Michael Stephens (Racers) and Tyreke Wilson (Legacy).

Double Olympic sprint champion, Elaine Thompson Herah, highlights the female competitors, with the MVP 100m and 200m star listed to contest the 400m. Jura Levy (Legacy), who will also be down to compete in the 100m, improving quarter-miler Roneisha McGregor (UWI) and Christine Day (Cameron Blazers) will also face the starter in the one-lap event.

The outstanding Shericka Jackson (MVP) will lead a star-studded 200m line-up, which also includes her clubmates Stephenie-Ann McPherson and Janieve Russell, along with the Sprintec duo of Anastasia Le-Roy and Ronda Whyte, as well as with Tiffany James-Rose from Cameron Blazers.

No spectators will be allowed inside the venue.