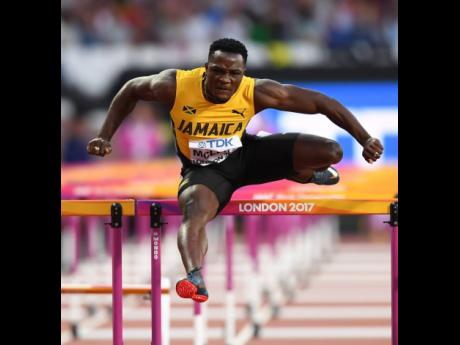 The 1997 World Indoor 60-metre hurdles champion, Michelle Freeman, is backing Omar McLeod all the way, as he seeks to defend his Olympic title. According to Freeman, who is now a coach at the University of Virginia, the 2016 Olympic 110-metre...

The 1997 World Indoor 60-metre hurdles champion, Michelle Freeman, is backing Omar McLeod all the way, as he seeks to defend his Olympic title.

According to Freeman, who is now a coach at the University of Virginia, the 2016 Olympic 110-metre hurdles winner will have to focus on himself to reach his goal.

“I watch Omar over the years, and Omar is a great sprinter as well as a great hurdler,” Freeman assessed from the dual perspective of both being a coach and as a former hurdler herself.

“My advice to Omar is just to continue to focus on [himself] and believe in the things that [he] can do. He’s just got to block out everybody else and concentrate on himself. Ultimately, nobody else can do it for Omar but Omar,” added Freeman.

With her own experience as a guide, the 1994 Commonwealth Games 100 hurdles champion believes McLeod and his coach will find the balance between his 9.99 second 100-metre speed and his hurdling technique.

“It all just depends on his coach, I can’t tell him how to do it. To be honest, as you get going in the race, there’s nothing that you can control. You can’t control it. You just gotta let it go,” she said, perhaps with her own encounters with excess speed in mind.

In 1992, after becoming the first non-American to win her event at the NCAA Outdoor Championships, she clattered a late race barrier in the Olympic quarter-finals.

In addition to the Olympic gold medal four years ago in Rio de Janeiro, Brazil, McLeod took top spot at the 2016 World Indoors and the 2017 World Championships in London. However, an injury stopped him in the 2019 World Championships won by tall American newcomer, Grant Holloway.

Freeman, who won Jamaica’s first major sprint hurdles medal with a bronze at the 1997 Worlds, thinks focus will aid McLeod in his quest in Tokyo.

A success for McLeod would make him the third 110-metre hurdler to retain the Olympic title after Americans Lee Calhoun and Roger Kingdom. Since Kingdom did it in 1984 and 1988, Cuba’s Anier Garcia has come closest to going two straight. Garcia won at the 2000 Games in Sydney, Australia, and collected the bronze medal four years later in Athens, Greece, when Allen Johnson of the United States triumphed.

McLeod made a bright return to hurdling with a controlled run, timed in 7.53 seconds over the 60-metre barriers in Fayetteville, Arkansas, on February 7. It was his first hurdles race since the 2019 World Championships final.