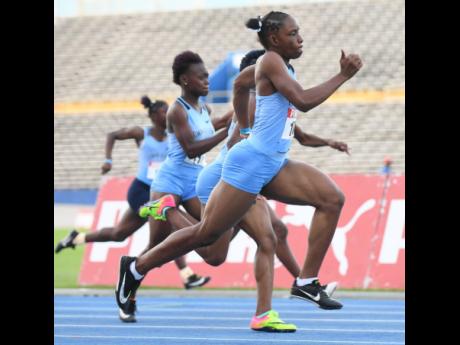 KC coach Leaford Grant was pleased with the performances of his athletes, who competed at four of the seven meets on the calendar for junior athletes.

“It is good to see the youngsters competing once again, and you could see the hunger amongst them to compete,” said Grant.

“For Kingston College, we had a reasonably good start. We can now look at the areas that need to be worked on,” he added.

Former St Jago High School sprint hurdling standout Vashaun Vascianna, who transferred to their sixth-form programme last September, is one of the interesting stories going into next month’s ISSA/GraceKennedy Boys and Girls’ Athletics Championships, and he made his debut in purple and white at the GC Foster College of Physical Education and Sports.

Competing in the Class One 110m hurdles and aided by a positive wind of +2.4 metres per second, Vascianna stopped the clock at 13.23 seconds to win the event ahead of Clarendon College’s Rhyme Christian, 14.12, and Jordan Woodley 14.15, of Rusea’s.

St Jago High’s Andre Harris and Excelsior’s Devonte Archer were also impressive in their hurdle events. Competing in the Class Two 110m hurdles, Harris raced to a fast 13.92 for the win as the KC duo of Jordan Campbell, 14.15, and Amontae Wray were second and third best overall.

Archer sent out early warning signals in the Class One 400m hurdles with a zippy 52.72 seconds for an easy win. His teammate, Sharvis Simmonds, was second in 56.44 with Shane York of St Jago running third in 1:00.47.

Meanwhile, Edwin Allen’s athletes, competing at two meets - GC Foster and St Elizabeth Technical (STETHS), enjoyed impressive performances that have left coach Michael Dyke reacting positively in what was a challenging weekend for him on a personal level.

Dyke, whose father passed away early yesterday, took time to credit the JAAA for the return of the sport.

“Firstly, I must congratulate the JAAA for trying so hard for the resumption of track and field and also Mr Keith Wellington and his team at STETHS for a well-planned and executed meet. It was a nice feeling when I heard the first shot fired to signal the start of track and field,” said Dyke.

“Edwin Allen did well, but regardless of the competition that was there, the joy to start competing again was evident,” Dyke stated.