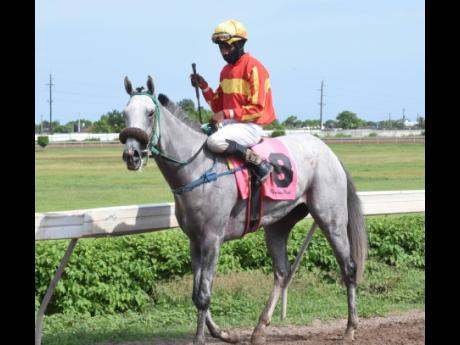 Having been out for almost a month due to injuries, top apprentice jockey, Oshane ‘Johnny’ Nugent, said he was itching to return to the saddle in hopes of continuing his wonderful form at Caymanas Park.

Nugent, who was the leading rider at the time of the injuries, was taking a three-year-old that is yet to race through its paces on February 11, when the animal ran into the track railing with the jockey aboard, throwing him from the saddle. He was taken to the Spanish Town Hospital where he was kept overnight before being released the following day.

Nugent said that he has been advised by the doctors to get some rest before he returns to the saddle, and added that he could return to horse riding within another month.

“I did a head scan and nothing is wrong with the brain, and so I am on a perfect road to recovery. I am just trying to get my body back together because I have not started to work any horses yet,” said Nugent. “I have been doing a little running and jogging now but nothing too hard because I am still feeling the effects of the fall.”

At the time of the fall, Nugent, who began riding in December 2019, was leading the jockeys’ championships with 13 wins, two ahead of last year’s joint champion jockey, Anthony Thomas. He has so far recorded 49 wins in his career. Thomas and Dane Nelson are currently leaders at Caymanas Park with 15 wins each.

Nugent underscored that he will return to the saddle a much better jockey because he has been watching tapes from previous races and, therefore, if the championship remains within his sights, then he will make a move for it.

“It is a major setback in terms of the jockeys’ championships, but that is how life goes because life is a journey, and so you just have to take it as it comes and don’t give up, and just stay strong at all times,” he said.

“It is going to be difficult from here to win it (jockeys’ championship) because I am not riding now, but whenever I get back, if it comes, it comes. If not, I am not going to be too disappointed about it,” Nugent stated.