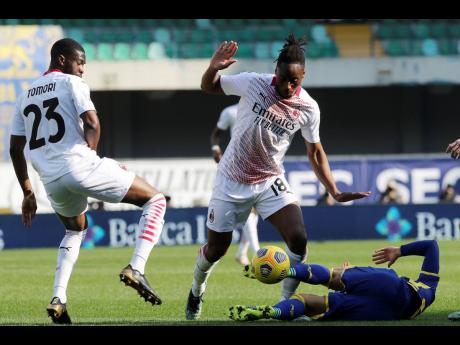 AP
AC Milan’ Soualiho Meite goes for the ball during the Serie A match between Hellas Verona and AC Milan, at the Bentegodi Stadium in Verona, Italy, yesterday.

AC Milan boosted their title hopes by winning 2-0 at Hellas Verona in Serie A yesterday despite missing a number of key players through injury.

The win will boost Milan’s confidence ahead of the first leg of the Europa League round of 16 against Manchester United on Thursday. The Rossoneri had only won one of their previous six matches in any competition.

“We have shown that we are still up there and we still believe in ourselves,” Milan coach Stefano Pioli said. “Playing so often helps you to also overcome slip-ups, we have always been balanced, even in evaluating our victories.

“We know how to deal with our defects and we know our strengths ... now we’ll focus on the Europa League, on a really stimulating match in Manchester.”

Milan were desperate for a victory in Verona to put pressure on city rivals Inter. But they were without a long list of injured players including Zlatan Ibrahimović, Mario Mandžukić, Ante Rebić and Hakan Çalhanoğlu.

Milan’s injury problems seemed to get worse when Gianluigi Donnarumma appeared to pick up a knock early on and reserve goalkeeper Ciprian Tătăruşanu started warming up but Donnarumma was able to continue.

Krunić fired Milan in front in the 27th minute when he curled a magnificent free kick into the top right corner after he had been tripped by Verona defender Giangiacomo Magnani on the edge of the area.

Milan doubled their lead five minutes after the interval when Dalot finished a well-worked team move with a shot into the top left corner.

Mancini scored the only goal of the match in the 24th minute as Roma moved a point above fifth-place Atalanta.

Genoa remained seven points above the relegation zone after their second loss in three matches. They had only lost one of the previous 10 since Davide Ballardini replaced Rolando Maran as coach.

Roma dominated and broke the deadlock when Mancini rose highest in the middle of the area to head Lorenzo Pellegrini’s corner into the top right side of the net.