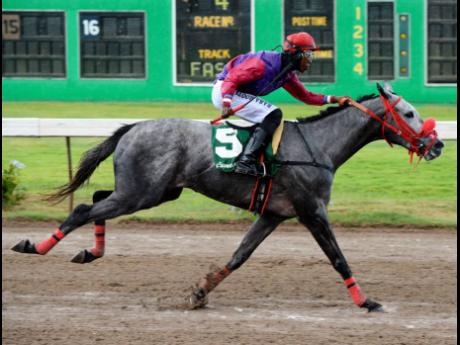 ROY ROGERS showed his battling qualities by turning back pesky HARRY'S TRAIN, before holding off the rabbit's stablemate, COCO CHANEL, and a late surge from BIGBANG, to steal yesterday's 'Lindy' Delapenha Memorial by a half-length in a driving finish at odds of 2-1.

Rated confidently in the one-mile race, upside HARRY'S TRAIN, by nine-pound claiming rider, Nicholas Hibbert, down-in-class ROY ROGERS stuck to his challenger whose sole aim was to set up the event for COCO CHANEL.

However, HARRY'S TRAIN's best efforts failed to move ROY ROGERS, who was travelling easily approaching the home turn and kicked clear of his challenger to straighten on the lead.

However, wound-up COCO CHANEL made a big move along the rail to quickly go second and got within a length of ROY ROGERS approaching the last half-furlong.

A stirring battle ensued with ROY ROGERS digging in to hold the mare at bay while another closer, BIGBANG, produced his signature late charge close home to force a three-way photo.

ROY ROGERS' battling victory was his sixth from 41 starts for trainer Dennis Lee and his owner, wife Faye Lee, clocking a solid 1:40.3 for the distance.

CURLIN'S AFFAIR marked Nunes' first win for champion owner, Michros, who has reportedly severed ties from Gary Subratie with whom he landed his first title last season, campaigning the likes of WOW WOW, St Leger winner, NIPSTER, and retired filly, ANOTHER AFFAIR, runner-up in the 1000 Guineas and Oaks.

Racing continues with another Saturday-Sunday meet at the weekend.