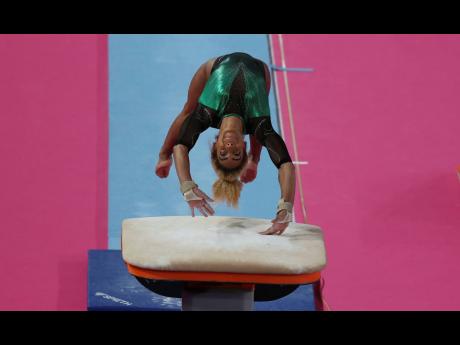 After more than a year without competition, national gymnast Danusia Francis says that she is excited not only for the upcoming Tokyo Olympics, but being able to tour with some of the world’s best gymnasts later this year.

The 26-year-old Francis was selected for the Gold Over America tour, a three-month series across the United States, starting in September and showcasing the best in women gymnastics. The event is headlined by multiple Olympic and World champion Simone Biles.

Francis says that she got the opportunity through her former college coach, Valorie Field at the University of California, Los Angeles (UCLA), and is looking forward to returning to the stage after being restricted because of the COVID-19 pandemic.

“My UCLA coach, Miss Val, recommended me and then the organisers contacted me, expressing their interest and then, eventually, formally invited me,” Francis told The Gleaner. “It’s so great to have these two huge events to look forward to after a long year of quarantining and having not competed for over a year now.”

The pandemic forced the postponement of the Tokyo Olympics, which she has already qualified for, to this July, and also resulted in several other competitions being cancelled.

Among those booked for the tour are UCLA graduates Katelyn Ohashi and Christine Peng-Peng Lee, as well as two-time Olympic champion Laurie Hernandez.

While looking forward to representing Jamaica later this year, she also hopes that the tour will serve as a means to inspire the next batch of potential athletes.

“I think it’s really important. Simone has created this tour with her team and one of her quotes is ‘I believe there is gold in all of us and it’s time to let that shine’, and I think this message on the tour will be important to demonstrate and help inspire the next generation,” Francis said. “I am very excited, honoured and looking forward to representing myself and Jamaica alongside so many brilliant gymnasts.”

Before then, Francis is increasing preparations for the Tokyo Olympics and says that despite the restrictions, she has been able to keep up with her preparations. However, she hopes that there will be opportunities for her to compete before the Games begin in July.