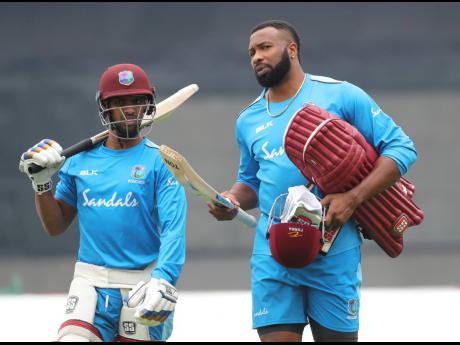 AP
West Indies’ captain Kieron Pollard (right) and Nicholas Pooran walk to bat in the nets during a training session in Chennai, India, on December 14, 2019.

The West Indies will be looking to get their One Day International (ODI) mojo back, as they kick off the three-match series against Sri Lanka, starting with the opening game today at the Sir Vivian Richards Stadium in Antigua at 8:30 a.m. Jamaica time.

The regional side has not had the best of fortunes in the limited-overs format in recent times, losing 21 games and winning only 13 matches since the start of 2019.

Their opponents for today’s encounter, Sri Lanka, aren’t much better in ODIs, winning only 10 matches and losing 14.

The last time the West Indies won an ODI series was against Ireland at home following a 3-0 win in the 2019-2020 series.

The home side will be looking to overcome their 3-0 away series loss to Bangladesh, and assistant coach Roddy Estwick believes the regional side is in good stead to do so, with the return of some familiar faces.

“We have gotten a lot of players back who weren’t in Bangladesh who have a lot more experience. Players such as Shai Hope, Jason Holder, captain Kieron Pollard and Darren Bravo. Also, we will be playing in our home conditions and as you know, we are a lot better playing in our backyard, so we are hoping that we will put on a better performance,” said Estwick.

The West Indies will be hoping that Hope can replicate his form shown when the teams last met, as the right-hander was super prolific, scoring the most runs - 238, with an average of 79.33, including scores of 51, 115 and 72.

With a spin barrage expected from the Sri Lankans, coach Estwick believes the players will be able to cope much better against the likes of Wanindu Hasaranga and Lakshan Sandakan.

“We have been working hard on batting spin, and we know that Sri Lanka will be coming with a steady diet of spin, but remember that we played them before in Sri Lanka a year ago and the spinners weren’t that dominant,” added Estwick.

A selection conundrum will be placed on head coach Phil Simmons, who will have to decide if he hands a debut to off-spinner Kevin Sinclair or go with left-arm spinner Akeal Hosein, who impressed on the tour of Bangladesh.

The batting line-up should see Shai Hope keep wicket and partner Evin Lewis at the top, with Darren Bravo, Kyle Mayers and Nicholas Pooran slotting into the middle order.

In the meantime, the Sri Lankans will be without two of their main batters, Avishka Fernando and Kusal Mendis, who were instrumental in the team’s dominant 3-0 win over the West Indies the last time the teams met.

They will be banking on the experience of Dinesh Chandmal and Angelo Matthews along with Pathum Nissanka as well as captain Dimuth Karunaratne.