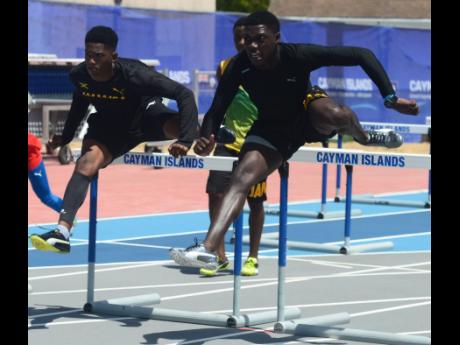 Jamaican sprint hurdlers Vashaun Vascianna (right) and Neil Sutherland go through their paces during a training session ahead of the start of the Carifta Games as the Truman Bodden Sports Complex in The Cayman Islands in 2019.

The 2021 Carifta Games has been pushed back to August 13-15 in Bermuda. The announcement was made by North American, Central American and Caribbean Athletic Association President Mike Sands during a virtual press conference on Thursday.

The region's leading age-group track and field event for national teams, was initially rescheduled for July 2-4 from its usually April date because of the COVID-19 pandemic. However, Sands said that given the recent announcement of the Caribbean Examination Council exam schedule, which runs from June 13 to July 16, they could not avoid a further delay in the competition.

Bermuda National Athletic Association President Donna Raynor said that the decision for the new date was based on avoiding an abandonment of the competition altogether.

"We all agreed, that if this date doesn't work, then we would have to look at cancelling the Games and no one wanted to cancel," Raynor said. Raynor added that the change received the blessing of World Athletics president Sebastian Coe.

The announcement presents potential challenges for local junior athletes who will see their seasons extended into the summer. Additionally, the World Under 20 Championships are scheduled for August 17 to 22 the week after the conclusion of the Games.