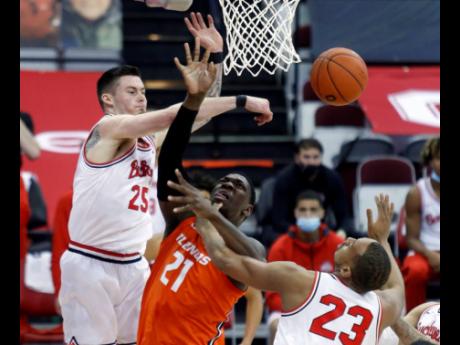 AP
Ohio State forward Kyle Young (left) and Illinois centre Kofi Cockburn (centre) come together at the rim as forward Zed Key defends during the first half of an NCAA college basketball game in Columbus, Ohio, on Saturday, March 6.

With a week to go before the start of the 2021 NCAA Men’s Basketball Tournament, national players Kofi Cockburn and Jordan Kellier hope to boost their schools’ chances of being selected to the tournament, as they compete in their respective conference championships this week.

Cockburn, who plays for the University of Illinois, will start tournament play in the Big 10 championship tomorrow, having earned a higher seed, thanks to their 16-4 record, which secured for them a bye in the first and second rounds. Among various bracket projections, they are expected to be chosen for the tournament as one of the number one seeds.

However, Kellier, who plays for the University of Utah, must help his team to a win in the Pac 12 tournament to stand any chance of qualifying for the 64-team field. They were scheduled to play the University of Washington in their first-round game last night.

Urban Knights manager Gordon Porter is pleased with the national representation on display this week, and believes that this shows that local talent can achieve and ascend to greater things.

“For me, this is good news. It tells me clearly that the talent that we have here has the ability to excel. I would not be surprised that if in the next couple of years, they would (make it) in the NBA,” Porter told The Gleaner.

National youth coach Nyron Hurd says that he is specifically proud of Calabar alumnus Kellier, who, although having played limited minutes in his first season, made a brave choice on his path to a Division One scholarship with Utah.

“He is someone you can easily say, he took a chance. He went up on a scholarship that everybody was saying, maybe he shouldn’t go there, that’s not the best place for him,” Hurd said. “But that was the only opportunity (and) he took it and worked his way into a Division One school; and to be a part of that process and to where that team is now, it’s obviously a big deal.”

Meanwhile, Cockburn is having a great season, and he is currently the only college player to average 15-plus points and more than nine rebounds on at least 65 per cent shooting, in the process helping Illinois to their highest national ranking (third in Associated Press poll) since 2005. Cockburn initially declared for the 2020 NBA Draft, but withdrew his consideration and returned for his sophomore season.

Hurd says that Cockburn continues to impress, and has become a beacon for the local game and for national youth players.

“It’s just magnificent to see what this young guy is doing, representing Jamaica while being an ambassador of Jamaican basketball; and he is currently the most dominant big over there. It’s really a big deal,” Hurd said.

Utah faces the toughest path to the National Championship tournament, but Porter says that he would not be surprised if Kellier and the Utes can secure the Pac 12 Championship and with it, a tournament berth.

“I would not be stunned if Utah were able to pull it off, but based on the [form], I think Illinois will go through, and I think Cockburn will continue to impress as well,” Porter said.

Last year’s tournament was cancelled because of the COVID-19 pandemic, effectively ending the college basketball season. This year’s edition will be played in its entirety in the state of Indiana because of logistical considerations caused by the COVID-19 pandemic. The teams as well as the matchups for the men’s tournament will be announced on Sunday night, after all conference champions have been determined.