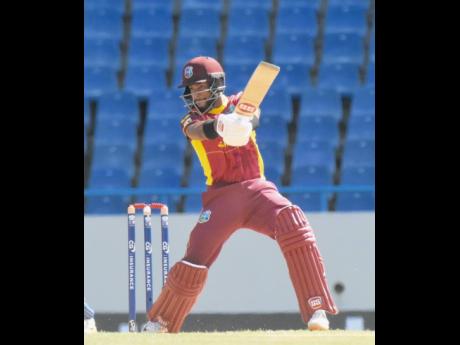 March 1, 2020, was the last time Shai Hope represented the West Indies in a One Day International (ODI), and in that game, the right-hander scored 72 against Sri Lanka in Pallekele.

Fast forward to a year and nine days later, and the Barbadian virtually picked up where he left off, this time he rattled up a resolute century to help guide the West Indies to a comfortable eight-wicket win over the Sri Lankans in the first ODI in Antigua.

Hope stroked a majestic 110 from 133 deliveries to help the West Indies chase down the 232 set by the visitors.

Hope didn’t even look like he missed a beat being out of the West Indies set-up, as he and Evin Lewis gave the home side the best possible start they could have imagined, putting on a masterful 143 runs for the first wicket.

Lewis, who also looked a player in good touch, stroked only four fours and two sixes in his knock of 65 before he fell to seamer Dushmantha Chameera.

Man of the match Hope made sure that he would cash in on the friendly Sir Vivian Richards pitch, bringing up his tenth ODI hundred off 125 balls. His effort saw him becoming the eight West Indian to score 10 or more centuries in limited-overs cricket.

Cheemera would also account for the wicket of Hope, who fell with the West Indies just needing 18 runs for victory, however, the right-hander was grateful he was able to get back into the groove of scoring runs.

“It’s a great feeling to achieve that, and I just wanted to go out there and score as many runs for the team and win as many games as I can. The key is to stay patient and trust in my ability, understand the situation and try to be as aware as possible and negate the threats they throw at us and finish the game,” said Hope.

In the meantime, Darren Bravo also marked his return to the team with an efficient unbeaten 37, while Jason Mohammed finished off the game with a boundary in his 13 not out.

Earlier, The Sri Lankans got off to a flying start after winning the toss and taking the first strike.

Openers Danushka Gunathilaka and captain Dimuth Karunaratne, put on 105 runs for the first wicket before captain Kieron Pollard sparked the resurgence, following an acrobatic bowl and caught to remove Karunaratne for 52.

Pollard would also be involved in the fall of the second wicket, all be it controversial, as Danushka Gunathilaka was given out obstructing the field after he was deemed to have interfered with the ball with his foot following a run-out attempt.

That second wicket saw the Sri Lankans losing wickets at regular intervals, thanks to some resolute bowling from Jason Holder and Jason Mohammed, who claimed two wickets each, while there was a wicket each for Alzarri Joseph and Fabian Allen. Ashen Bandara chipped in with an even 50 before he was the ninth wicket to fall.