It all adds up for Calculus 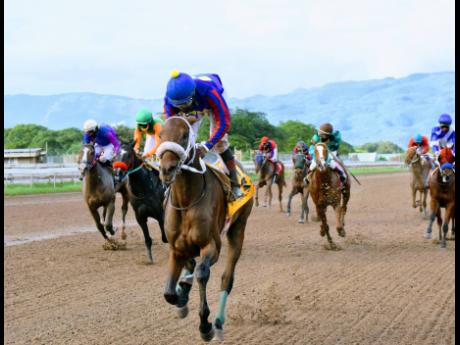 Calculus’ 10-week lay-up shouldn’t adversely affect him in tomorrow’s Sir Howard Stakes, considering his shape at exercise and the absence of any frightening speed to contend with in the six-furlong sprint.

The Sensational Slam-Trinket Box offspring has instead worked like a winner, putting in a strong shift upside celebrated grade-one stablemate, TOONA CILIATA, on Monday.

Though unraced since finishing fifth when fancied at 9-2 in the Jamaica Two-Year-Old Stakes on December 27, CALCULUS has really worked well for his return and looks set to stake claim as a classic hopeful, having seemingly got over issues, which had affected him heading into his last outing.

An impressive three-length winner on debut late November, Anthony Nunes-trained CALCULUS was back at the races mid-December, outsped in third behind stablemates HOIST THE MAST and GO DEH GIRL in the six-furlong Dye Job Sprint.

For a second-time starter, beaten four and a half lengths by speedy HOIST THE MAST, CALCULUS was far from disgraced, finishing on the tail of the runner-up, importee GO DEH GIRL, who had already won two races.

For his next assignment, the Jamaica Two-Year-Old Stakes, two weeks later, CALCULUS’ preparation seemed a bit off, a spotty six-furlong, mile-chute gallop, in 1:16.0, pale in comparison to his glowing workouts earlier that month.

CALCULUS didn’t appear keen down the backstretch in the Two-Year-Old Stakes, tenderly handled by Omar Walker, almost tall in the saddle, entering the straight third from last, but somehow managed to close for fifth when asked for an effort inside the last furlong and a quarter.

Reporting off a rest, Monday’s exercise spin with TOONA CILIATA was certainly an eye-catcher. TOONA CILIATA’s 1:07.2 was a bullet time, the fastest at five and a half furlongs for the morning, always ahead of CALCULUS by approximately two lengths for the duration of the workout.

Meanwhile, BILLY WHIZZ, runner-up to imported stablemate LURE OF LUCY last time out, albeit some 10 lengths in arrears, appears to be better at middle distances but has also trained well and should be CALCULUS’ main threat.

REGNANT, a winner on debut at five furlongs straight on Ash Wednesday, showed signs of sire Midnight Hawk’s speed when getting off the mark. He kept company with HOIST THE MAST last Saturday, 1:02.3 for five furlongs round, not a bad workout at all, but not comparable to CALCULUS’ spin with TOONA CILIATA.