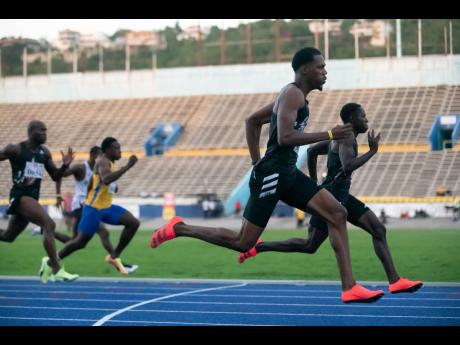 Racer’s Track Club’s Miguel Francis stole the spotlight at yesterday’s Jamaica Athletics Administrative Association’s Qualifying Trial Meet for seniors, inside the National Stadium, after producing a solid 20.50 seconds, running in a negative wind of 1.5 metres per second to capture the Men’s 200 metres event.

His winning time is number two on the World Athletics Top List in the event, just behind the United States’ Aldrich Bailey, with 20.49 seconds.

Francis, who was born in Antigua and Barbuda and now represents Great Britain was hailed a few years ago as a special athlete, but has seen his progress suffer due to persistent injuries.

Yesterday he looked like his old self, and was quite relaxed in winning the event ahead of Sprintec’s Oshane Bailey 20.83, and Nigel Ellis (MVP), who was third in 21.03.

Another non-Jamaican, Zharnel Hughes, who also trains at Racers Track Club, showed really good form as he made it two from two in the Men’s 100 metres, following up on his win in the event, two weeks ago.

Despite an average start, Hughes ran on strongly in the end to catch training partner, Oblique Seville, to win in 10.13 seconds, as Seville was second in 10.18 seconds.

It was a good day for Racers Track Club athletes, as Keeno Burrell finished on top in the Men’s 400 metres after winning his heat in 46.93 seconds. Troy Williams of G.C. Foster College was second in 46.94 seconds with Sprintec’s Romario Williams getting third in 47.42 seconds.

Running out of lane one, she made a late rush in the final 50 metres to pull of the win, as early leader, Candice McLeod of UWI had to settle for second in 52.61 seconds with her teammate and pre-race favourite, Roneisha McGregor taking third in 52.71 seconds.

Opening her season in the event, double Olympic sprint champion Elaine Thompson Herah, finished second in her heat in 56.26 seconds, which was ninth fastest time overall in the event.

Sade Williams of Barbados made it back-to-back wins in the Women’s 200 metres. The MVP athlete clocked 23.08 seconds, getting the better of former Hydel star, Ashanti Moore, 23.24, with Shashalee Forbes from Sprintec taking third place in 23.31 seconds.

There was a personal best for former MVP athlete, Shimarya Williams, who won the Women’s 100 metres in 11.33 seconds. Olympic Games and World Championships 400m bronze medallist, Shericka Jackson of MVP, who seemed to suffer an injury near the end of her race, won her heat in 11.46 seconds for second overall, with Kasheika Cameron also of MVP, taking third overall in 11.64 seconds.