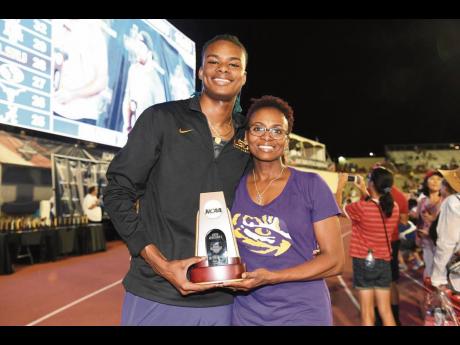 HISTORY was created on Friday’s second day of the NCAA Division One Indoor Track and Field Championships in Fayetteville, Arkansas, as 21-year-old Juvaughn Harrison, a senior at Louisiana State University (LSU), produced a personal best and world-leading mark of 8.45m in the long jump and 2.30m in the high jump, becoming the first man in NCAA Indoor history to sweep both Indoor titles.

Harrison, the 2018 IAAF World Under-20 Championships bronze medal winner in the high jump, also created history when he won both events at the NCAA Division One Outdoor Championships.

The Sunday Gleaner caught up with his mother, Georgia Harrison, a Jamaican, following the historic performances of the LSU standout.

“It is tears of joy for me, as I am very excited and happy for his accomplishments,” said Georgia from her home in Huntsville, Alabama.

“I knew he wanted to repeat what he had done two years ago at the Outdoor Championships for Indoors, so I had no doubt in my mind that it was reachable. For an athlete of his calibre, anything is possible and I am a very proud mommy,” she added.

Two weeks ago, Harrison captured the South Eastern Conference (SEC) Championships double, but the elder Harrison admitted that she was quite nervous about her son competing at Nationals.

“I was nervous for him because unlike SEC where the events were a day apart, this time around, both events were held on the same day, minutes apart from each other,” she said.

Georgia, a former Holy Trinity, St Jago High and G.C. Foster College student/athlete, who also attended Alabama A&M University on a track scholarship, expressed disappointment that she was not able to attend the Championships to give support to her son, due to no spectators being allowed because of the COVID-19 pandemic.

“I am disappointed that I was not there to give him support but with the pandemic, I understand. I am mostly disappointed that it was not aired during the time of competition but Outdoors is around the corner so if spectators are allowed then his biggest supporter/cheerleader will be there,” shared Georgia, who competed in the 400m hurdles and was teammates with the likes of Juliet Campbell, Michelle Freeman, Cheryl Ann Phillips and the late Twilet Malcolm at St Jago High.

She added that she always saw potential in her son from a young age.

“I am not surprised by what he is doing now because in high school he was very talented. He played football, soccer, basketball and was very good in the hurdles, but somehow, he chose high and long jump and went on to win several state titles,” she said.

Asked if there was ever any consideration of her son competing for Jamaica, her response was: “Since competing for the USA at the junior level in 2018, his mind has been set to make it to the Olympic Games and for the USA, despite the stiff competition at the senior level, and I am just here to support him and his choice,” said Harrison.