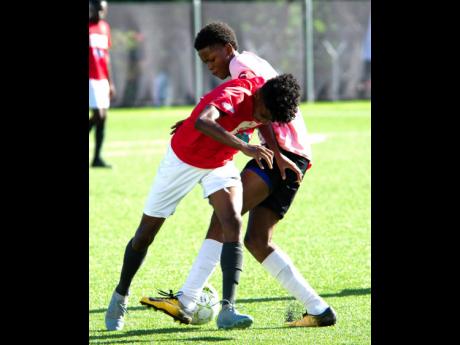 File
Alex Spencer (left) of Real Mona tries to get the better of Sean Porteous of Cavalier in their Alliance MoneyGram KSAFA Under-17 final, which was played at the UWI/JFF/Captain Horace Burrell Centre of Excellence on Saturday, July 13, 2019.

General Secretary of the Kingston and St Andrew Football Association (KSAFA), Dwayne Dillon, confirmed that the organisation is looking to reclaim its dual parish status and will be submitting this resolution, which was passed at its recent annual...

General Secretary of the Kingston and St Andrew Football Association (KSAFA), Dwayne Dillon, confirmed that the organisation is looking to reclaim its dual parish status and will be submitting this resolution, which was passed at its recent annual general meeting, to the Jamaica Football Federation (JFF).

“We need to get back to where we were and be recognised as two parishes,” Dillon told The Gleaner.

Prior to 2014, KSAFA, which is also recognised as a confederation, was essentially administrated as two parish associations within one organisation, which meant that the body, benefitted from, among other things, the voting privileges of the Kingston delegates and the St Andrew delegates, which amounted to 13 votes overall.

Each parish has five votes, plus there is an additional one for each JFF executive and one for the confederation president.

However, this was stripped during the JFF’s restructuring exercise, which was undertaken during the stewardship of former president Captain Horace Burrell. The new constitution acknowledged parish associations as opposed to parishes, meaning that KSAFA was seen as a singular entity and not one that involved two separate associations.

However, Dillon argued that in reality, KSAFA represents two parishes, and he believes that this status should be reinstated.

“This is a resolution for the (KSAFA) President (Wayne Shaw) to take to the (JFF) board as we should be recognised as two parishes,” Dillon insisted.

Some football observers argue that despite representing two parishes, KSAFA remains a single administrative body and should be afforded the same privileges as other parish associations.

However, Dillon maintains that they have a valid case and that the association is convinced this is the way to go.

“This information represents the facts, and we are just putting the facts to the (JFF) board members and hoping that good sense prevails,” Dillon commented.

Meanwhile, the JFF is currently in the process of amending its constitution on recommendation from the world-governing body, FIFA, and an increase in the number of voting delegates is one of the main items on the agenda.